Kadhi Kadhi ?? : Kadhi in Marathi language means "When"....And this was exactly my state of mind... I wanted to have "Kadhi" since a long time ( It's a thick gravy made out of thinning curd with water, and adding chickpea flour to it ). This is a very popular dish in North India ( it is said that this is a must-have dish in proceedings of a marraige !!!) In Gujrat, Maharashtra and Rajasthan, this is a popular dish too but the preparation varies from place to place. In North India, thick gravy is made and pakoras ( fried dumplings ) are added. In Gujrat and Rajasthan, jaggery is added in the preparation and hence the taste is little sweet. Also the consistency is thin compared to the one made in North. It is soup-like consistency and served with rice.

It had been ages i had Kadhi... This is one dish which i didn't know how to make and thought it to be very dificult ( always afraid i wont get the consistency right ). Also not many Restaurants offer this dish, and if they do they don't have the right taste! I enjoyed Kadhi 6 months back when i had gone to the Jaipur city of Rajasthan. That was a nice typical Kadhi served in a thali ( without the pakoras ). Here is what the Thali ( Plate ) looked like at Suraj Restaurant : 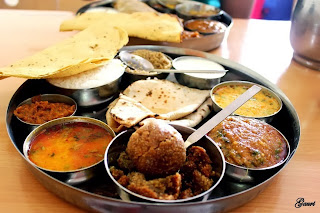 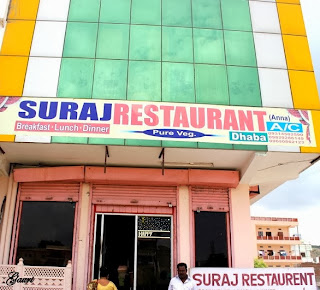 But i wanted to have the Kadhi- Gole ( As is known in Maharashtra, gole means GOL- round... so the gole's are round balls dumplings of gram flour ) and as my mom cooked it... I still haven't got a chance to cook or eat it... When i went home in Diwali festival, i had demanded to my mother that i wanted to eat Kadhi- Gole, but she mentioned that Kadhi is not prepared during festival or auspicious occasions. I still don't know the reason for it... Maybe it's superstition that onions and garlic was not eaten during festivals in earlier days. Or maybe Kadhi is known as a dish that is made when no one wants to cook, its that easy!! And during festives, a lot of dishes are supposed to be prepared and eaten....well, if any of you find the real reason behind this, please let me know....

So, recently i saw a post on a Food Forum by a friend Ranii Kaur about Palak Pakoras in Palak Kadhi cooked in typical Punjabi style !!! I had Palak in my fridge anyway and decided to give it a try. I took the pakora recipe from her and made the Kadhi in traditional way as my mother makes it :)) And it turned out super delicious....Served with rice, peanut chutney ( recipe uploaded earlier ) and Kelyachi koshimbir ( Traditional salad recipe of banana ), this tasted heavenly and made our tummy's full :))))

Well, i got to know, that this recipe was taught by her mother, to Ranii. So lets dedicate this article to Ranii's mother... special Thanks to her !!!!

Mix all the pakora ingredients together in a bowl ( except the oil ). Heat oil in a kadhai and when the oil is hot enough, add small tea spoonful or round balls of the pakora batter and fry till golden brown. Remove the pakoras on a Kitchen tissue to drain out excess oil. Keep them aside.

Take the yogurt in a bowl and whisk it well... Add besan to it and mix well so that no lumps are formed. Now add about 3 cups of water to this...Always remember the ratio of curd:water is 1:3.
Add turmeric powder and keep aside.

Heat oil in a pan. Add the cumin seeds. When they splutter, add fenugreek seeds and red chillies ( break them into 2 ). Fry for half a minute and then add ginger. When it starts to turn brown, add the onions and fry for about a minute more. Now add the palak and fry on high flame till all the water oozes out from palak ( just for about 1-2 minutes and keep stirring continuosly otherwise it will burn ).

Now add the yogurt mixture to this, let it come to boil...then put the flame to low and let it simmer for 10-15 mins... keep stirring in between.
Lastly, add the red chilli powder... stir well and then add the fried pakoras to this.

Yummy Kadhi -pakoras in Punjabi style are ready... And addition of palak makes it healthy too :)