Indian- Chinese : A common cuisine in India, where chinese food is adapted according to Indian taste. Not only Chinese, but even pizzas and burgers at popular food-joints like Mcdonalds, Pizza Hut or Dominos are made in such a way that they suit the taste of us Indians...Yes, we like spicy food and yes, we love the way we are :))) I remember a lot of my relatives and friends staying abroad, on their visit to India, want to visit Mcdonalds once, to see how the Burger tastes here and are surprised to see the Maharaja Mac and Paneer Salsa wrap..!!! Though they find the burger too spicy, they would still want to eat it with water running down their nose, for the enjoyment of taking back home memories of eating at Indian-Mcdonalds :)
Similar way, they are surprised to see the Chinese- thelas ( open-carts ) at every nook and corner, selling chinese noodles, manchurian and American Chopsuey. Indian chinese is definately spicy ( lot of spicy sauces ), more vegetables and i think, they add more of ajinomoto ( seasoning ). There are authentic chinese restaurants too which serve the perfect dishes as they should be ( Dimsums served in covered baskets keeping it warm and soft, Noodles served with the right amount of spice and correct seasonings, and always a green tea or a jasmine tea refill throughout your meal).. But just as we love dining here, we also love the thela-wala's taste :)))

South indian-chinese combo : How Indian can you get, that you think of making idli in a chinese style...It's just impossible to think about... we have heard about chilli chicken, paneer chilli or even veg chilli... but Idli chilli? The name itself sounds strange...
Just as Rajnikant ( the south Indian super star who is also THE "God" for many ) is capable of doing any action stunts (To name a few...his cigarette stunts are the most famous, he travels faster than light, he defies gravity and he doesn't need a bullet-proof jacket because he can stop bullets with his mind!). Rajnikant is known for all his unbelievable and impossible action sequences that he acts. So here is a humble tribute to Rajnikant ( Rajni-anna as we call him ), a terrific actor and full-on entertainer!!! Just as he makes impossible things possible, does fusion-acts and it always turns out to be a super combo, we tried making this south indian-chinese combo and turned out to be a hit!!! 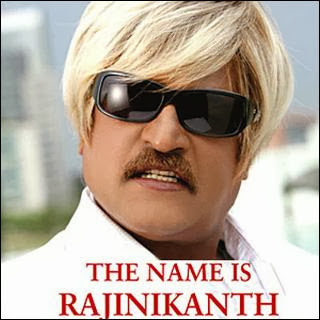 My friend had made this recipe for her grandmother who was a strict vegetarian and didn't like paneer...She highly recommended it to me and i decided to give it a try.... Trust me, it turns out to be a great starter recipe or even as a snack... You can even pack this in a tiffin for breakfast or lunch... Its healthy, its yummy and its easy-to-cook :))) 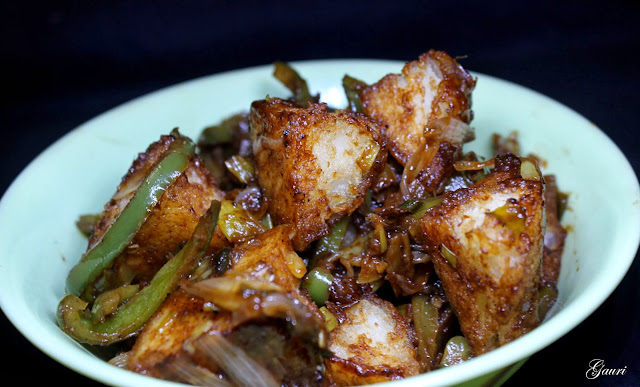 Cut each idli into 4 parts and deep fry them till they are golden brown. Remove on a kitchen tissue that takes out excess oil.
Slice the capsicum and spring onions lengthwise. Also use the green leaves of the spring onions, they are healthy and add taste.
Mix 1 tbsp cornflour with 2 tbsp of water well and keep aside.
Heat 1 tbsp olive oil in a pan. Add ginger garlic paste, and saute for 30 secs. Now add the green chillies and saute for 15 secs. Add the capsicum and spring onions and let them cook for 10 mins. Don't cover the pan. Let it cook in open, stirring occasionally. This maintains the crispiness of the vegetables.
Now add the cornflour- water mixture to this and immediately throw in salt, pepper and mix it all properly.
Now add the soya sauce, tomato ketchup and chilli sauce.
Mix all the ingredients well and let it cook for 1 minute.
Finally, add the idlis and mix well.