After about one and half hour of trek, we decided to walk downhill crossing some local homes and smiling women doing their daily chores. The guarding dogs always greeted us with their barks, as compared to the cows/buffaloes who didn't seem bothered. The homes, as we saw, were always painted bright in colours of blue, green, pink. There is a lot of use of Batan-Una (Pata-varvanta as we call in Marathi! It is a flat stone and a grinding stone used to process different kinds of foods), mud vessels, metal utensils and food cooked on wood burning village stove. A typical Village stove is made of mud and stones and the fire is lit with the charcoal and/or wood. 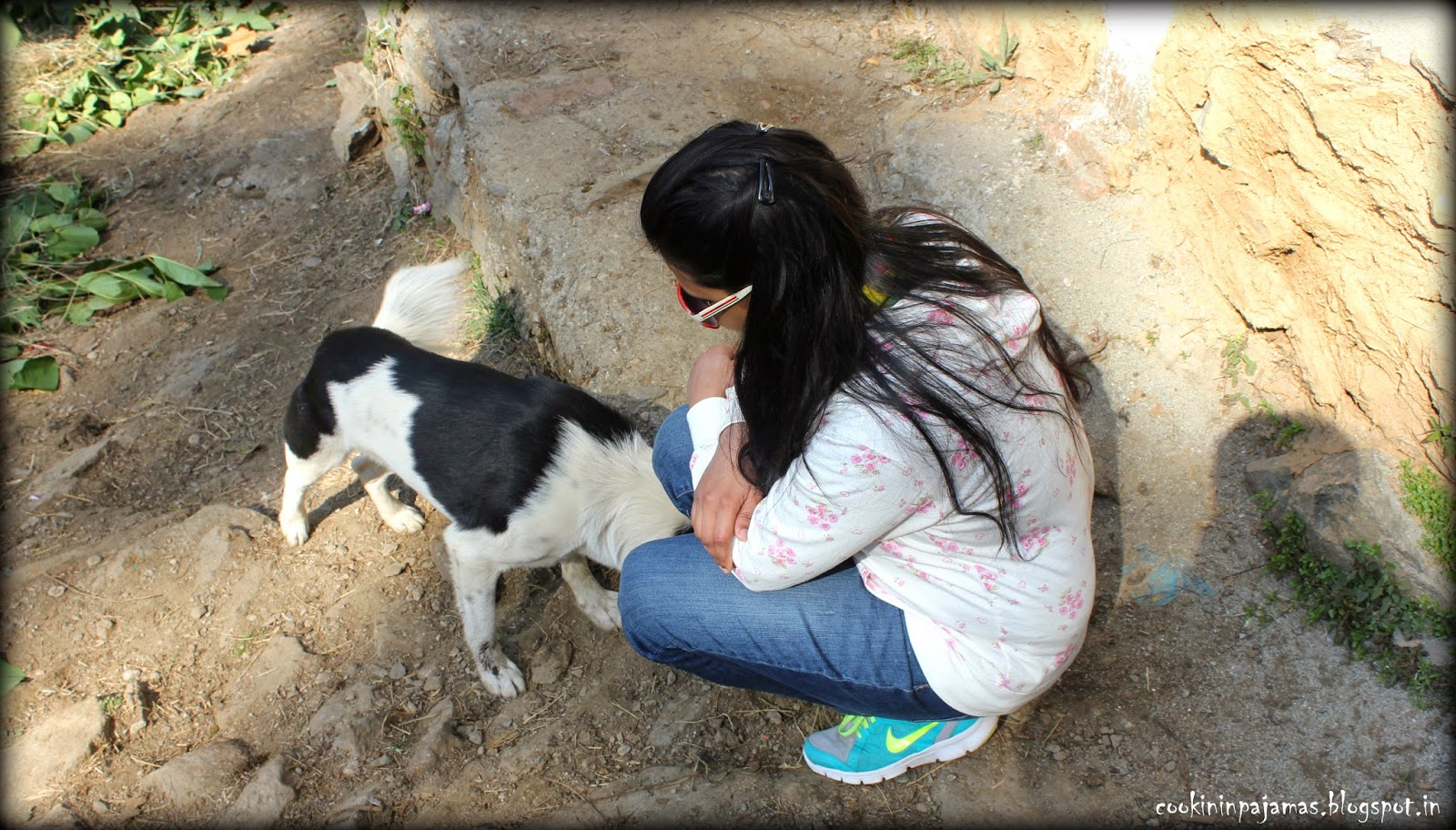 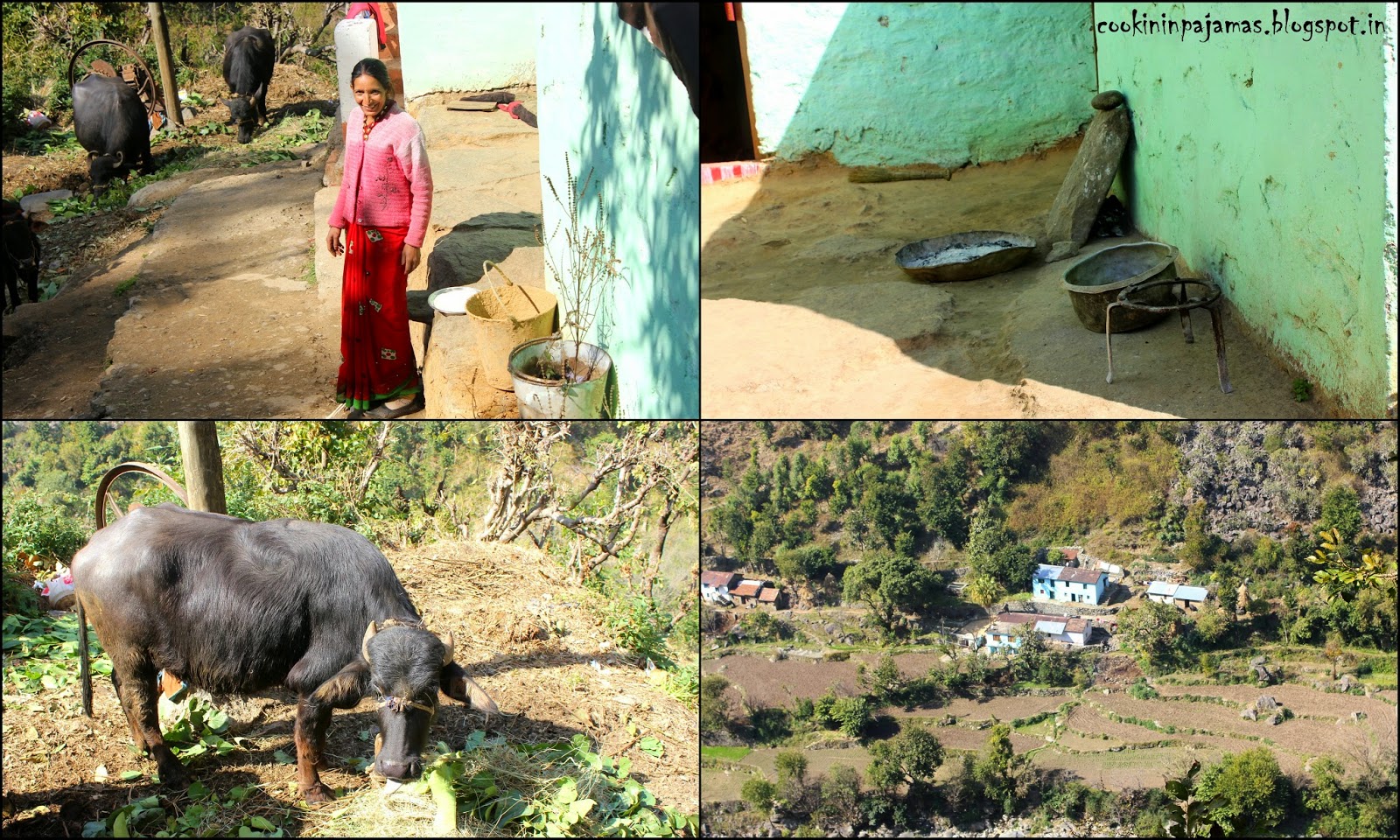 The locals do a lot of farming (mainly Terrace farming), eating their own grown veggies and supplying the abundance to a local towns nearby - Bhowali, Haldwani, Bhimtal etc. Arbi and potatoes are staple diet and some also catch fish from the river and eat. Buffalo milk is preferred as compared to cows', who are mostly used for farming/agricultural purpose. 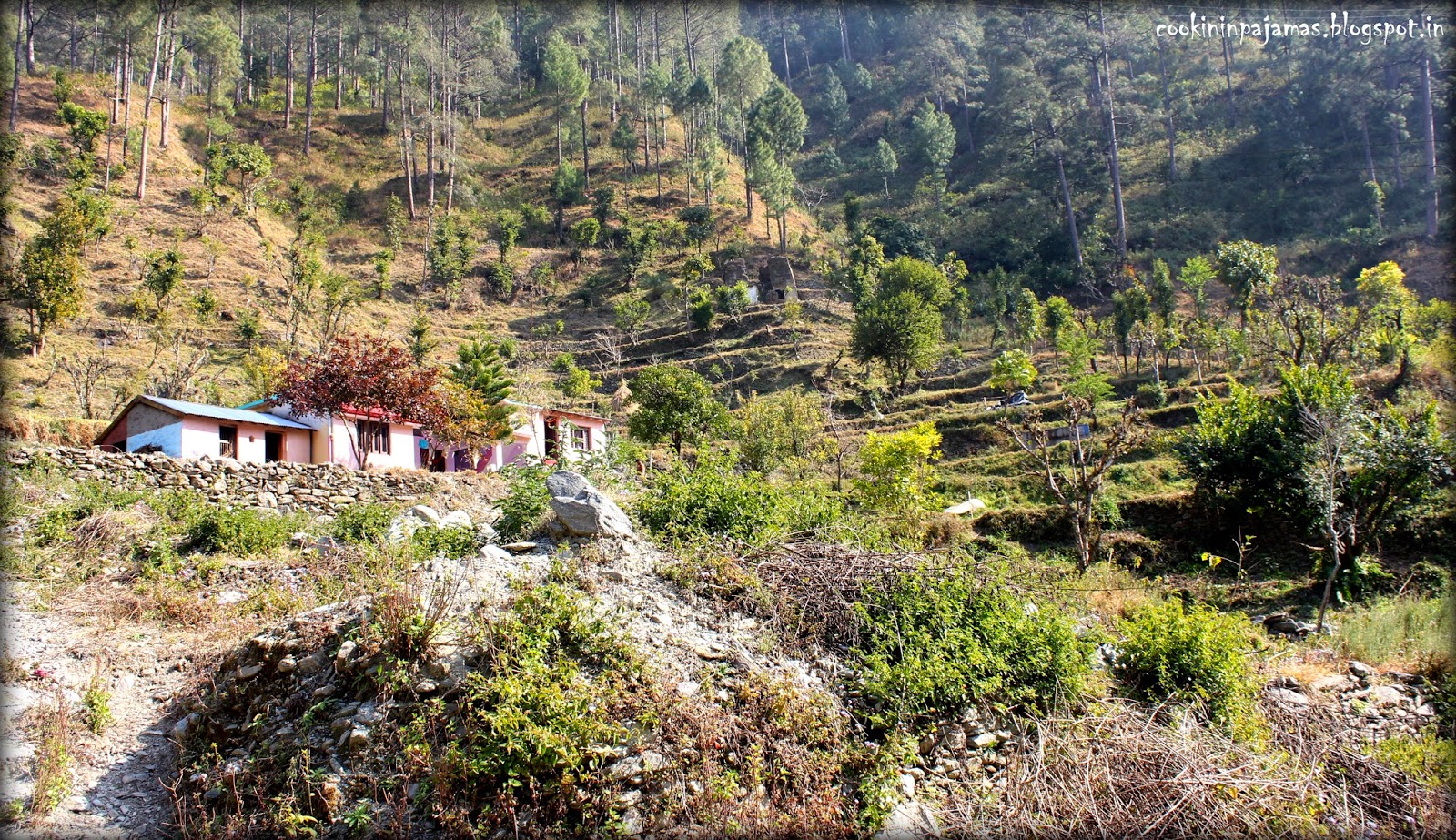 Few kids go to town for school, but a lot of them help their parents in the farm. Little girls help their mothers in the kitchen and we saw some washing clothes along the river. As compared to other tourist destinations, they never bother the visitors/tourists but are busy in their own sweet world. Guess the place has made them serene and humble. 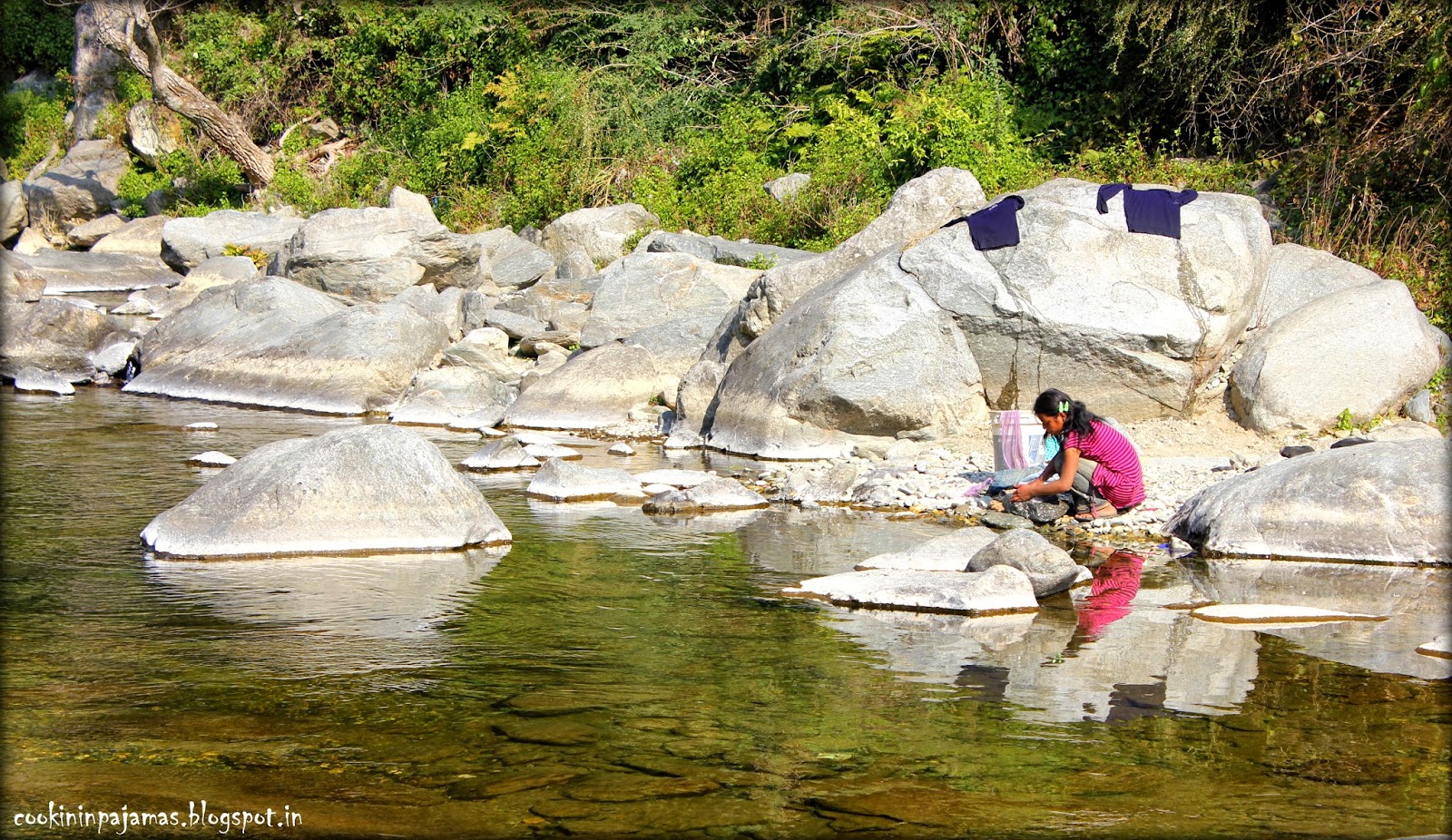 We reached a 100-odd year old bridge named "Jhoola-pul" which was built by the British. The bridge offers some breathtaking views on both sides. A 30-40 minute trek crossing the river from the bridge to the resort is a photographer's walk. 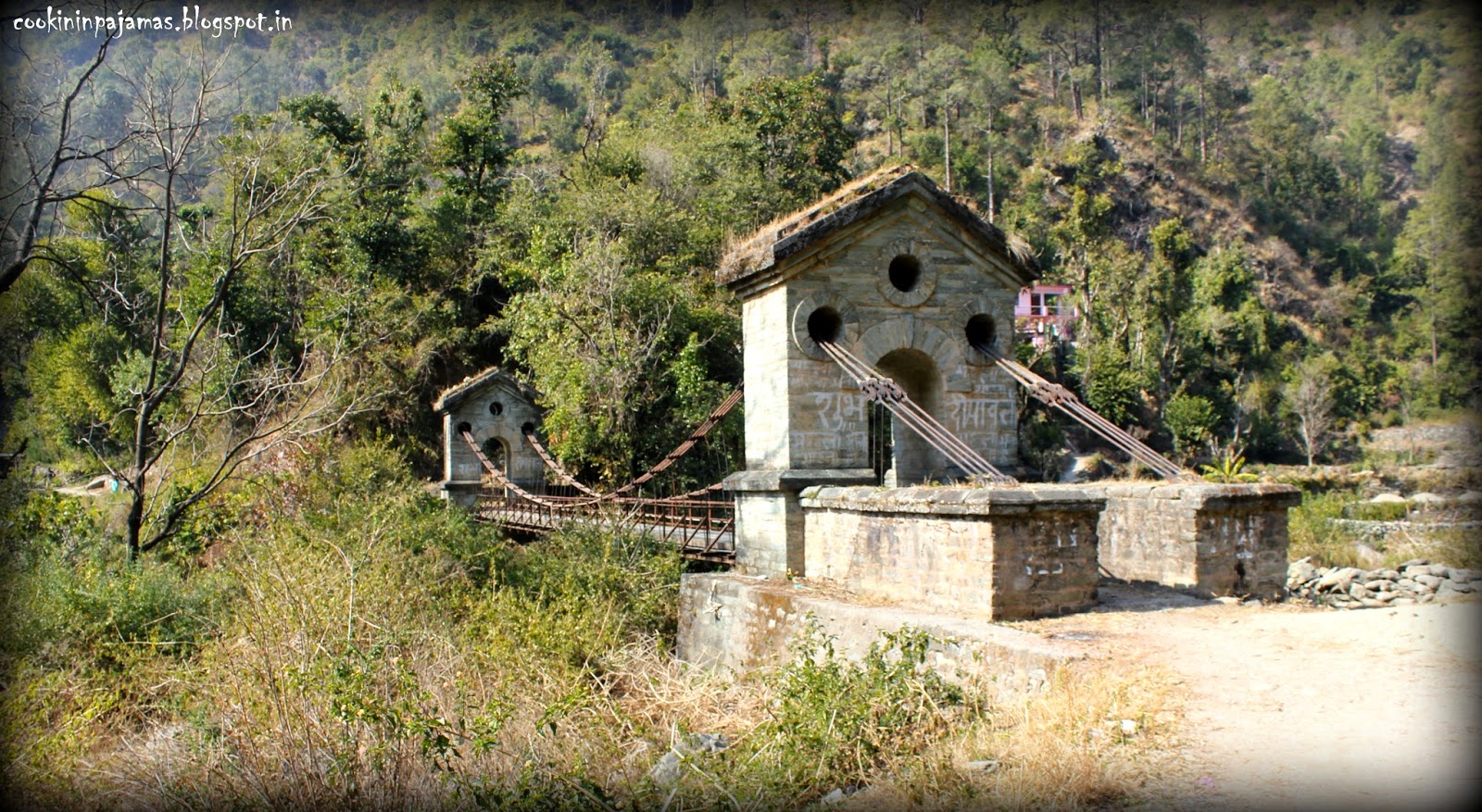 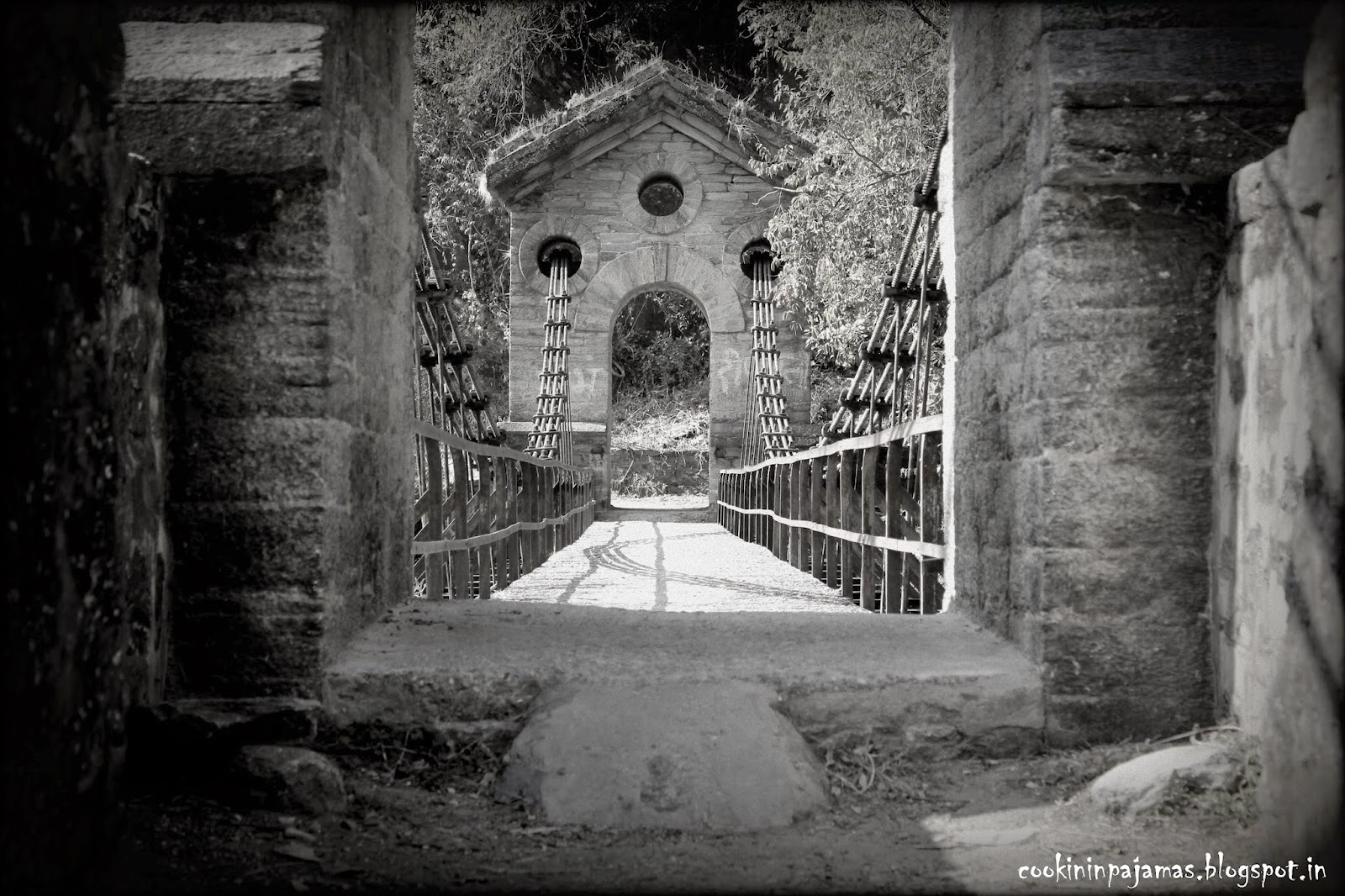 Once back, we were welcomed to an elaborate Kumaoni special lunch. The delicacies still have a taste on my buds. Khada masala chicken, Arbi fry, Bhatt ki daal (also known as Chudkani as told to me by one of our facebook page followers), ragi ki roti, sitaphal sabzi, bhaang ki chutney, homemade pickles, gulab jamun and freshly picked baby carrots from the garden as salad. Can it get better? 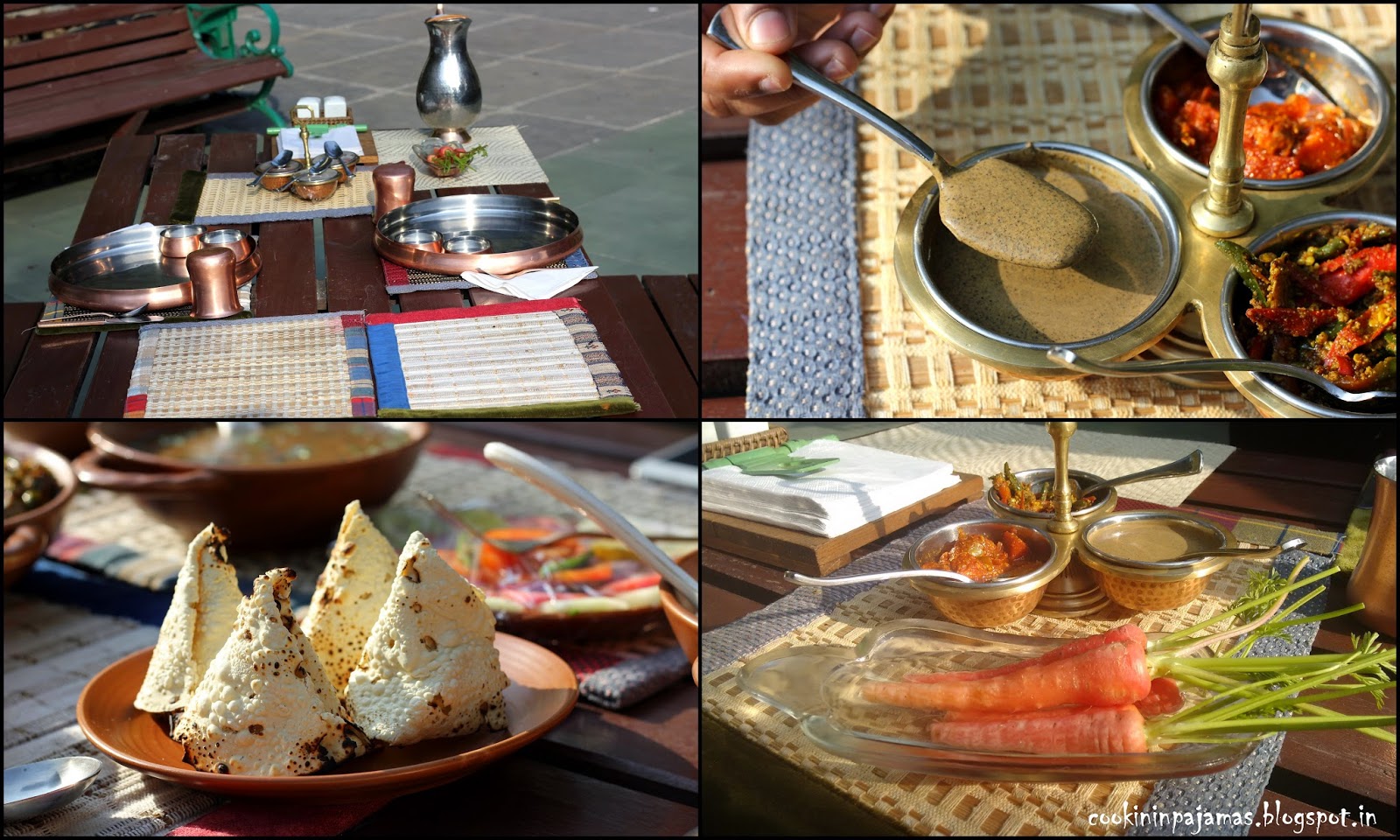 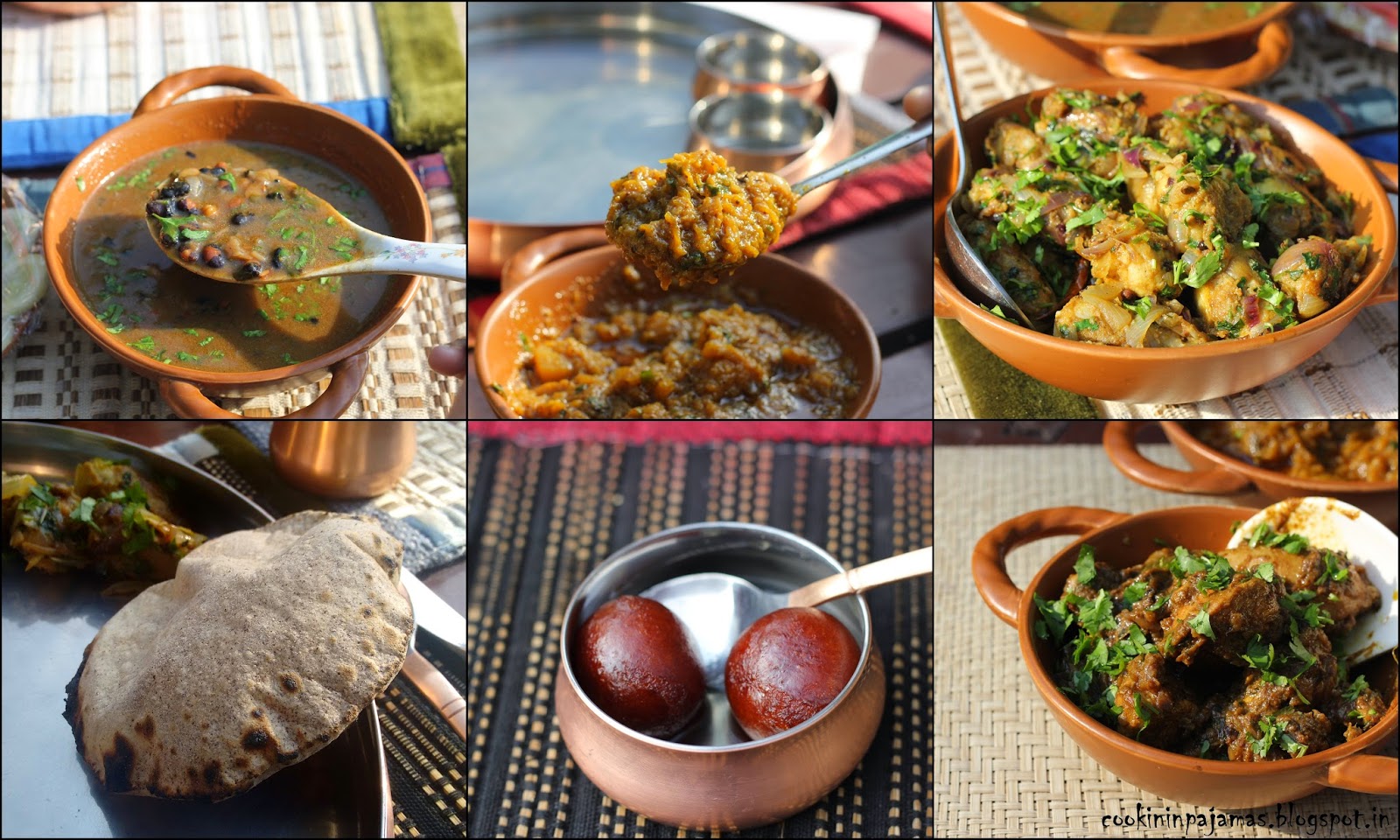 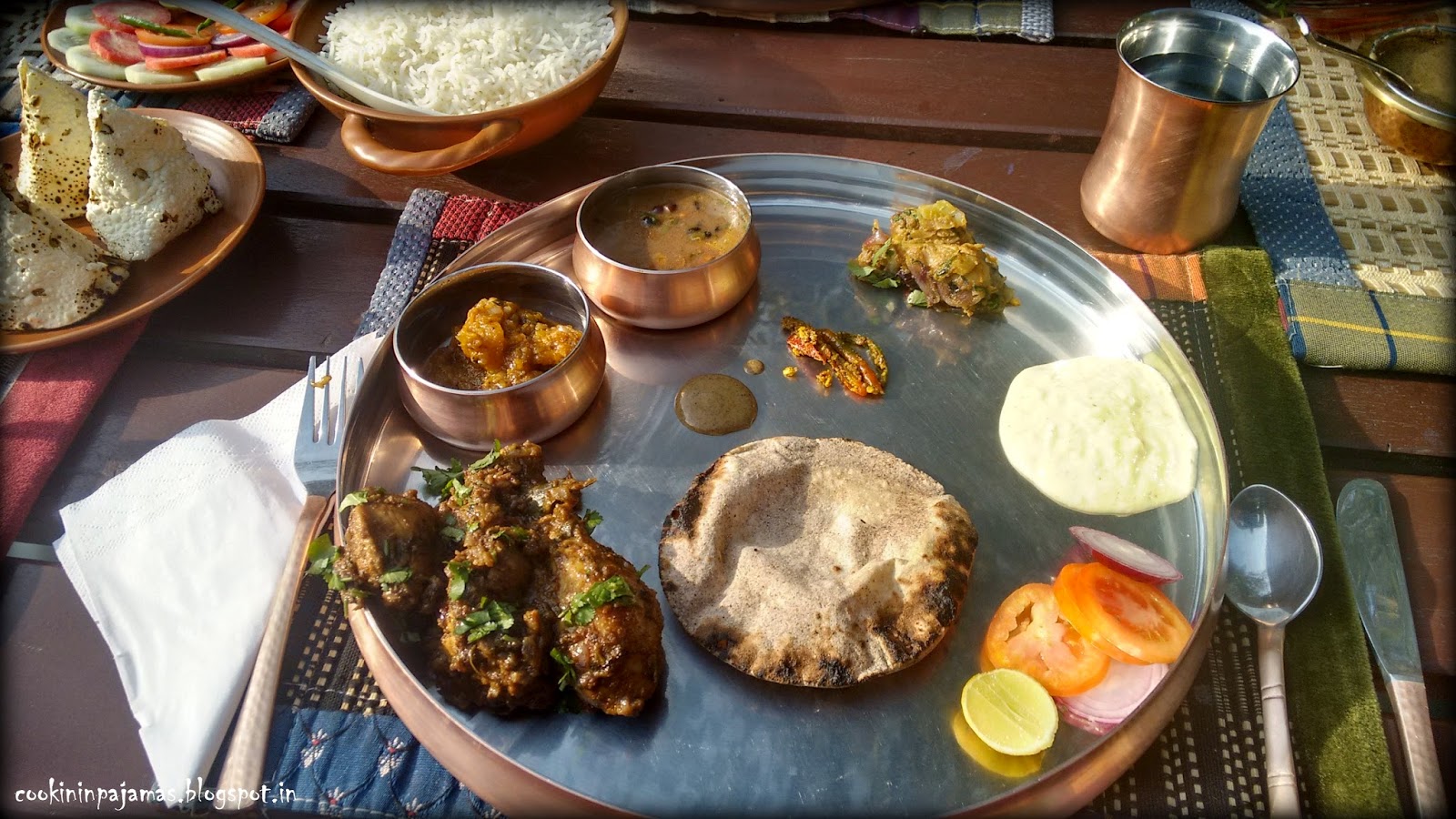 Again over-eating our diet, we went for a small trek with Dinesh, crossing river and jumping on the rocks to the "Paradise on earth"- Pari-tal. This place has crystal clear water made into a natural pool flowing down the mountains like a waterfall. Surrounded by mountains and rocks from all sides, i never wanted to leave that place. So, Dinesh told us a story behind that lake which i would love to share with you all. It is said, that a merchant used to flow down woods from the top to the towns/villages below and on one such occasion, the woods never reached the destination. On finding out the reason, it was seen the woods were absorbed in this lake. The merchant gave a sacrifice of 5 lambs at a nearby temple, and the woods automatically came up and reached the town. It is said so, the merchant left doing this business after that and since then the pool of water is known as "Pari-tal" (Pari meaning angels). 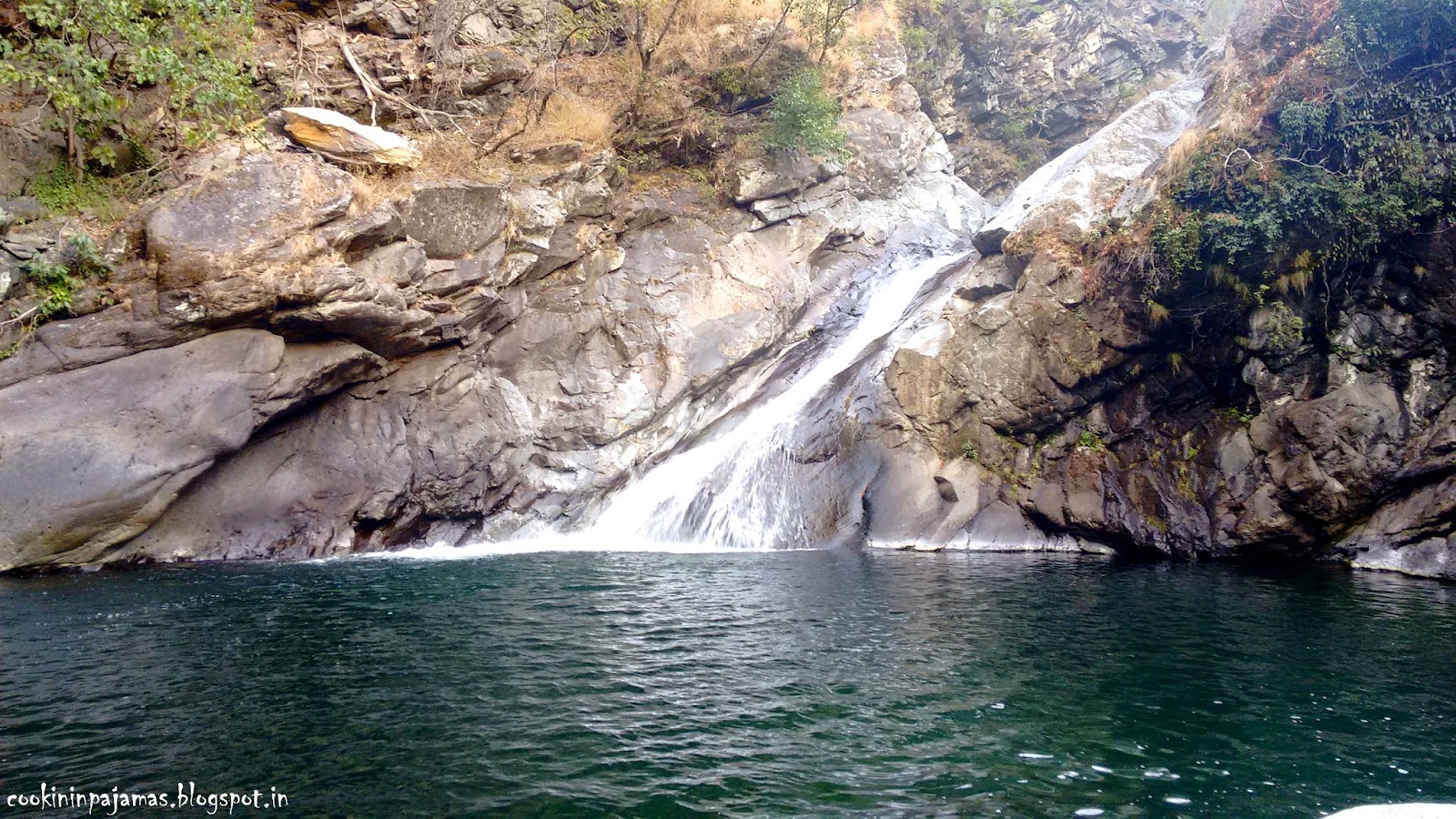 The place looks as mystical as the story and there are a lot of positive vibes in that place. Back to the resort, we saw the staff at work cutting weeds and planting potatoes for the season. Its so good to see there are so many activities to do in life, than going to malls, shopping or watching movies. 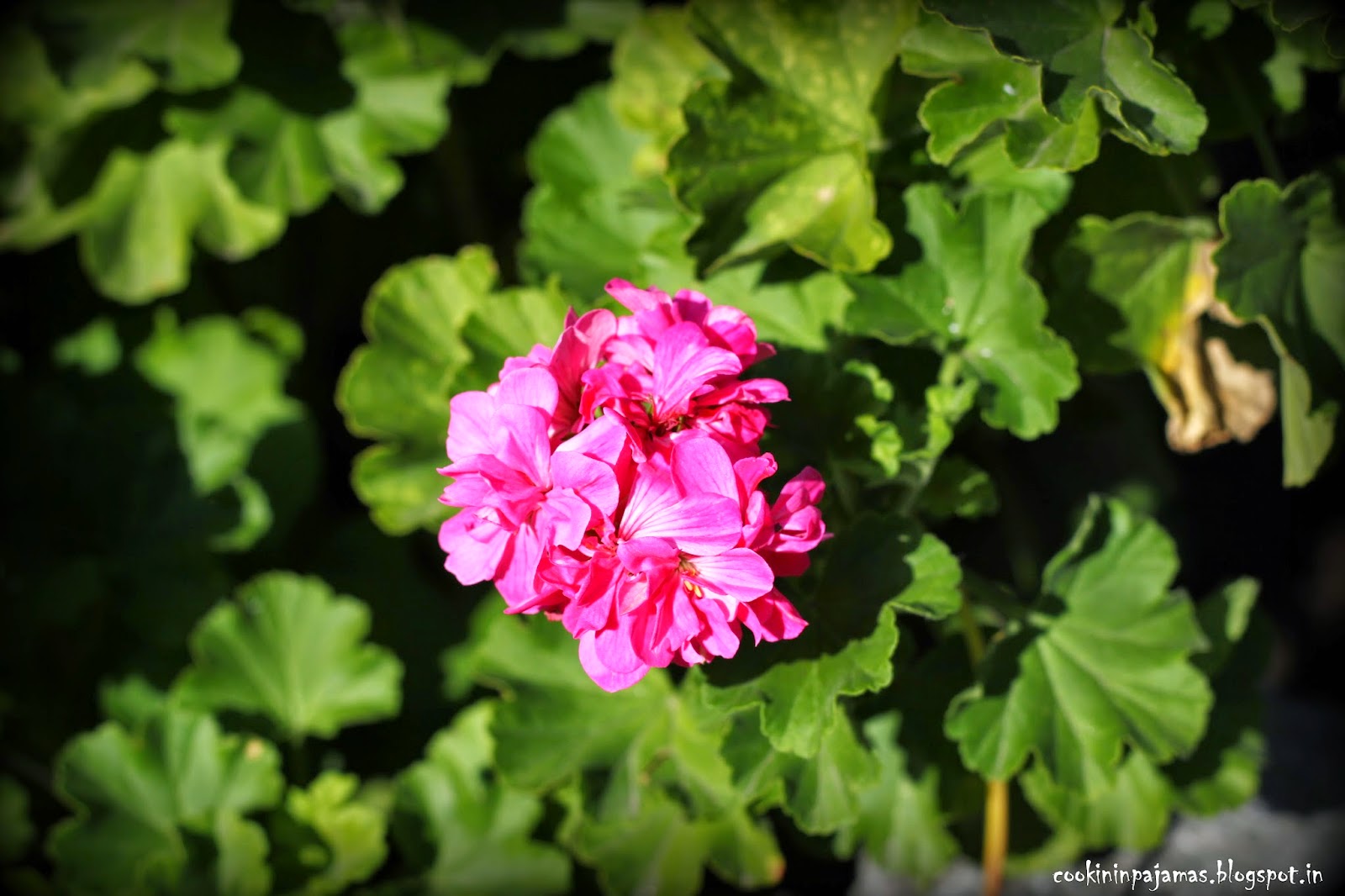 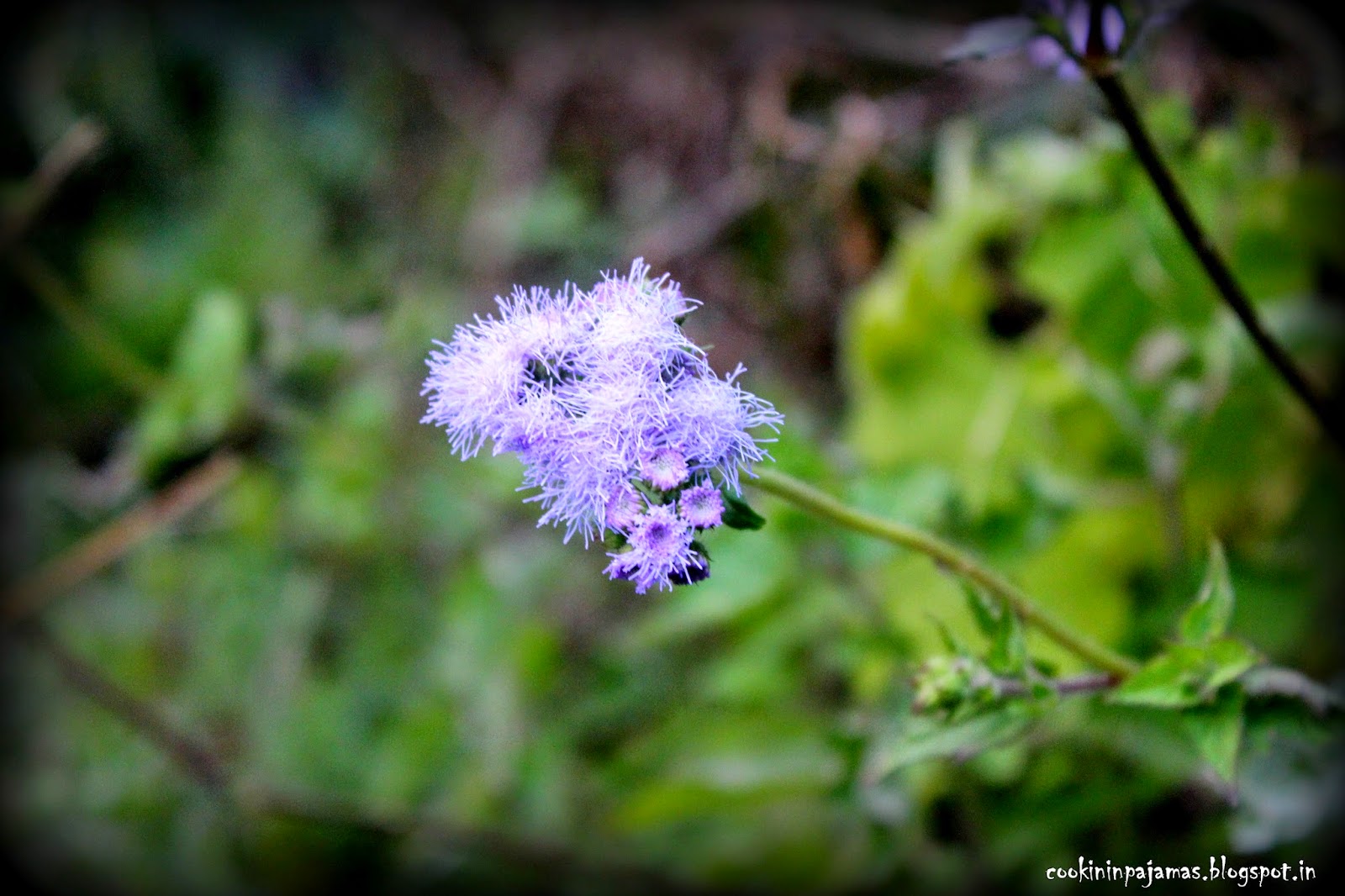 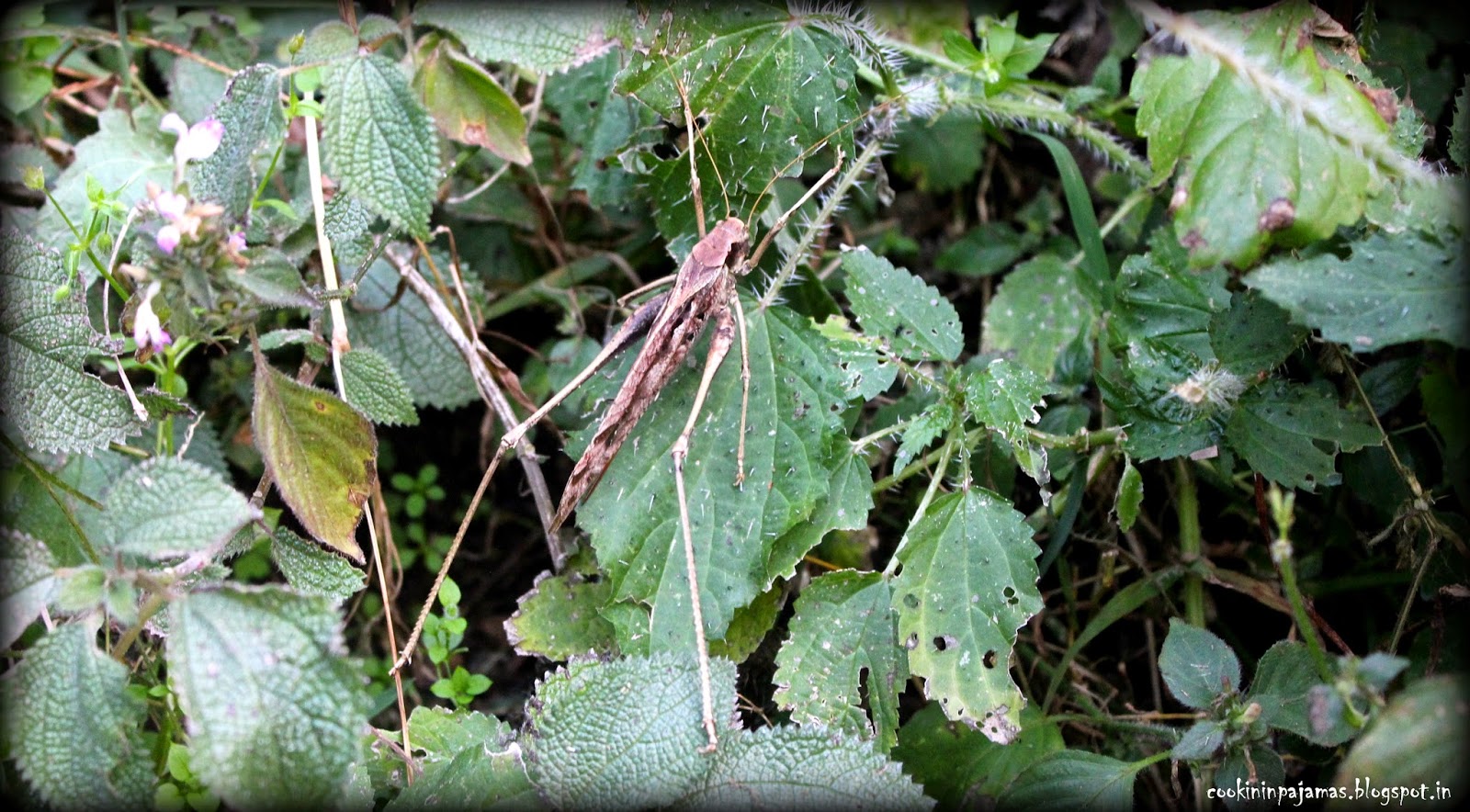 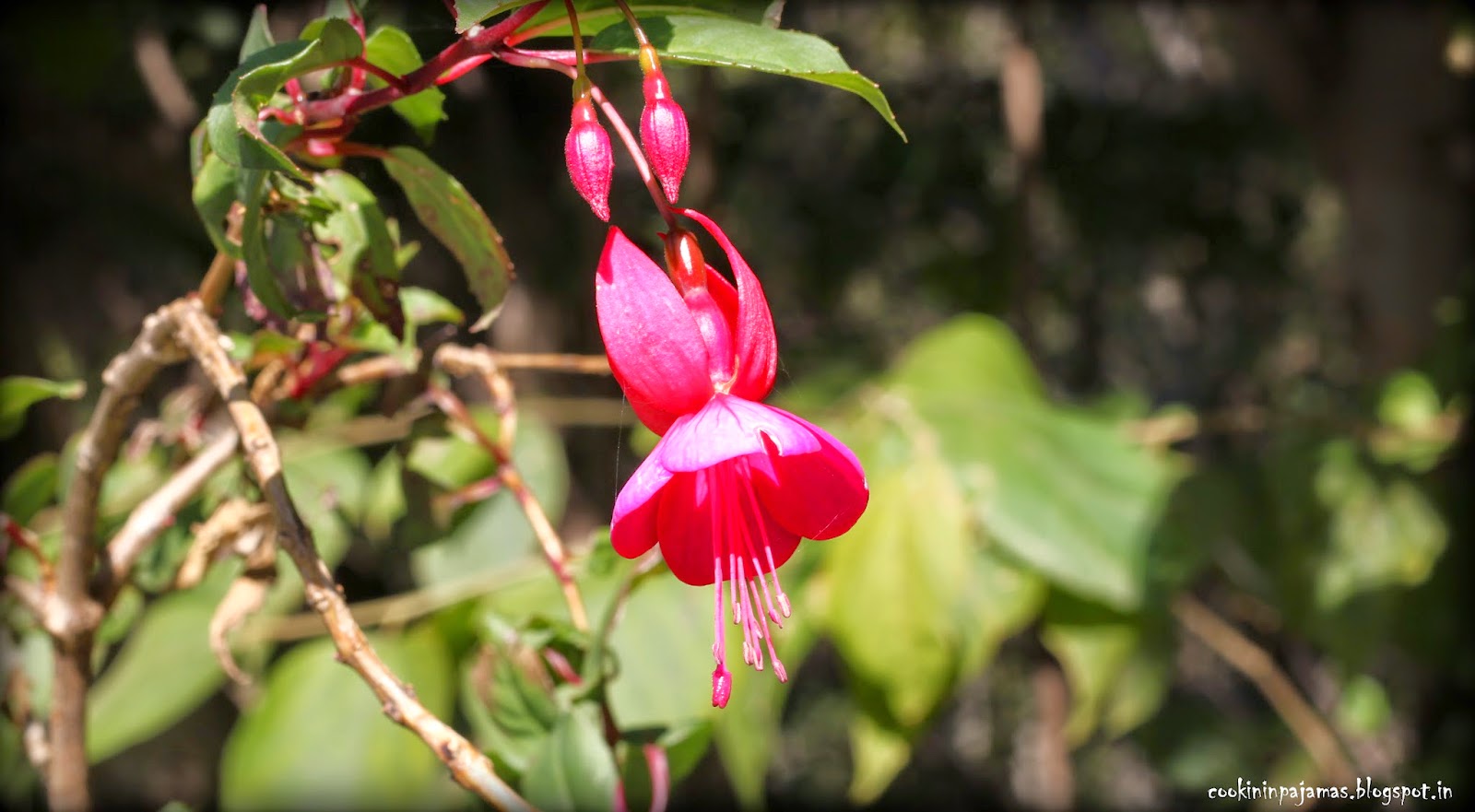 Evening saw us with some cold winds and we sat by the river having our tea-coffee. And then came surprises one after another!!! To make our anniversary special, we were greeted to a bonfire, some juice, some Elton-john songs and a cake placed in a small decorated shack. A table surrounded with plants, flower petals shaped in hearts and candles. The staff members won our hearts by making us feel so special. 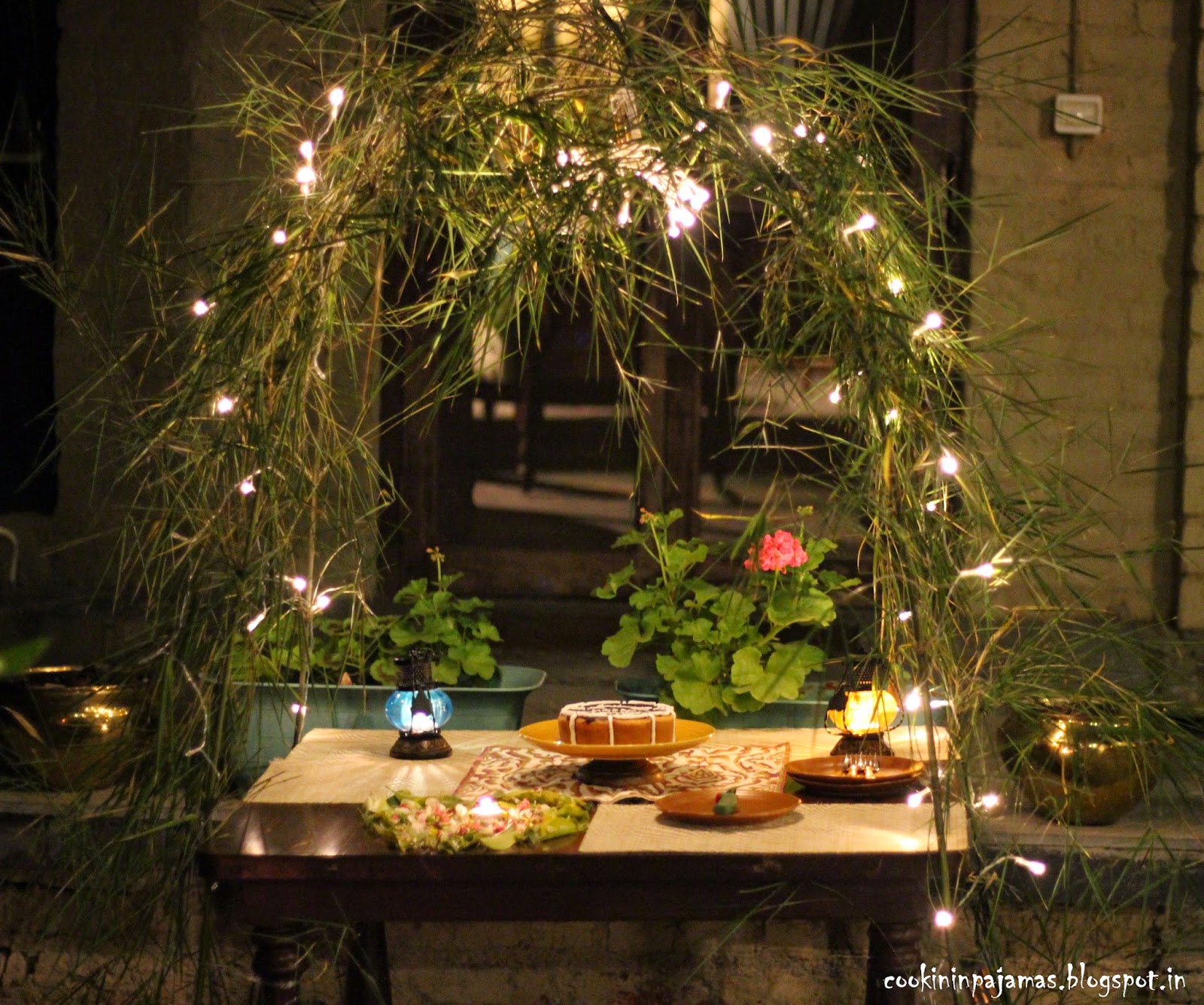 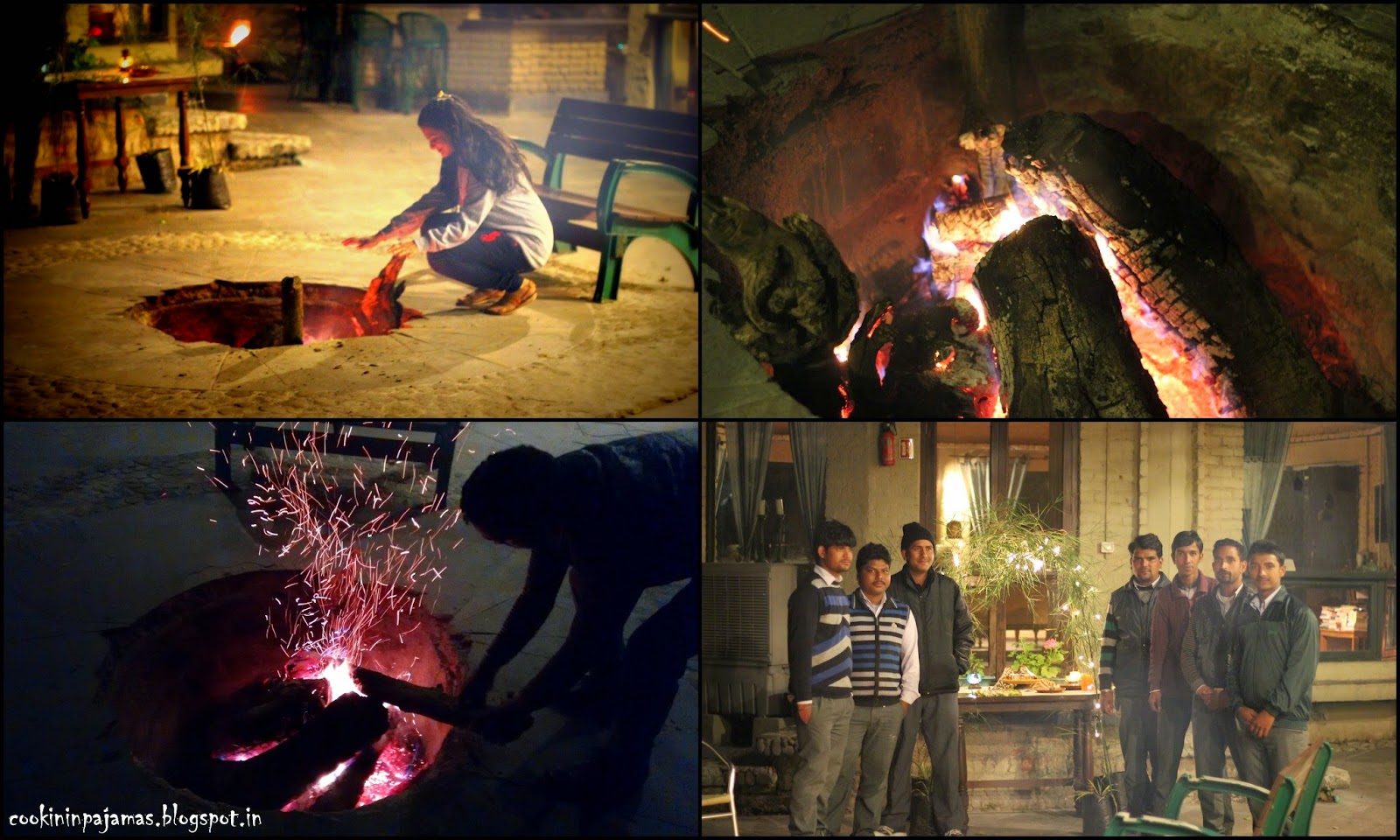 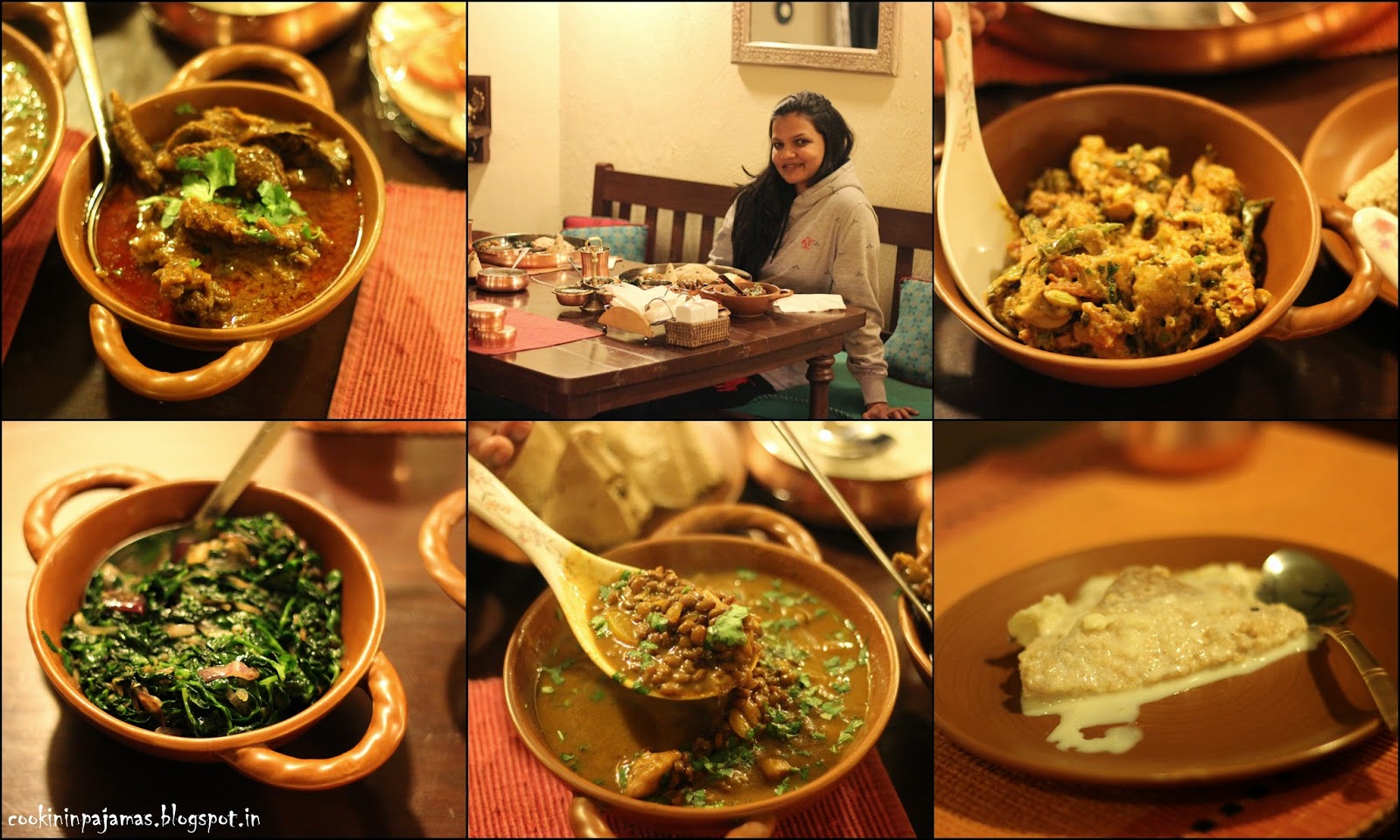 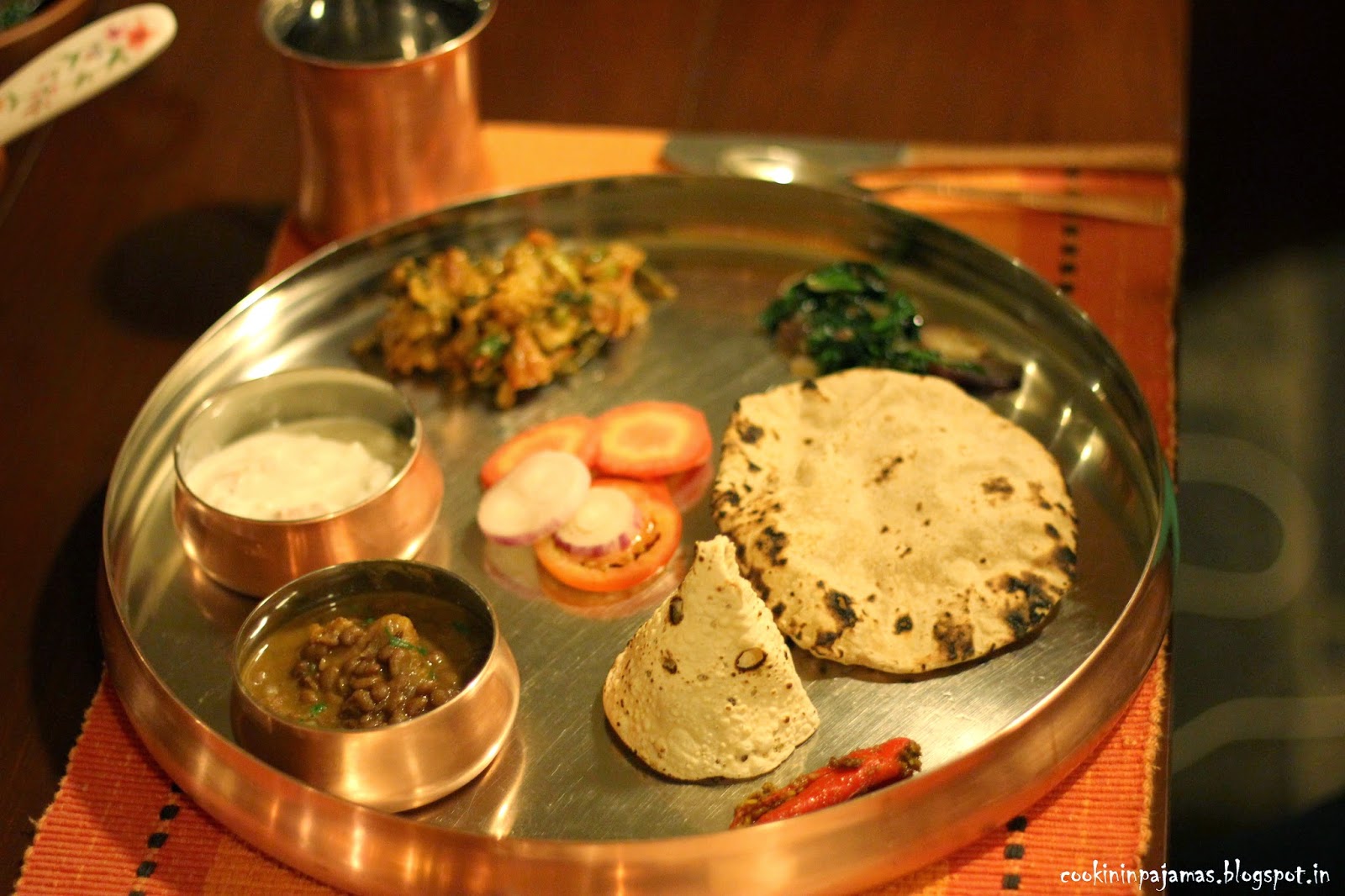 Now comes the most lovely surprise! We didn't know when these guys came in the room and switched on the heater, the bed-warmer and placed this beautiful flower decoration on our bed!!! Our smiles became wider and wider with each passing moment. So, there we slept under the open sky looking at the moon and stars on a warm bed decorated with flowers in a dim-lit warm room!!! The perfect pampering for our celebration! 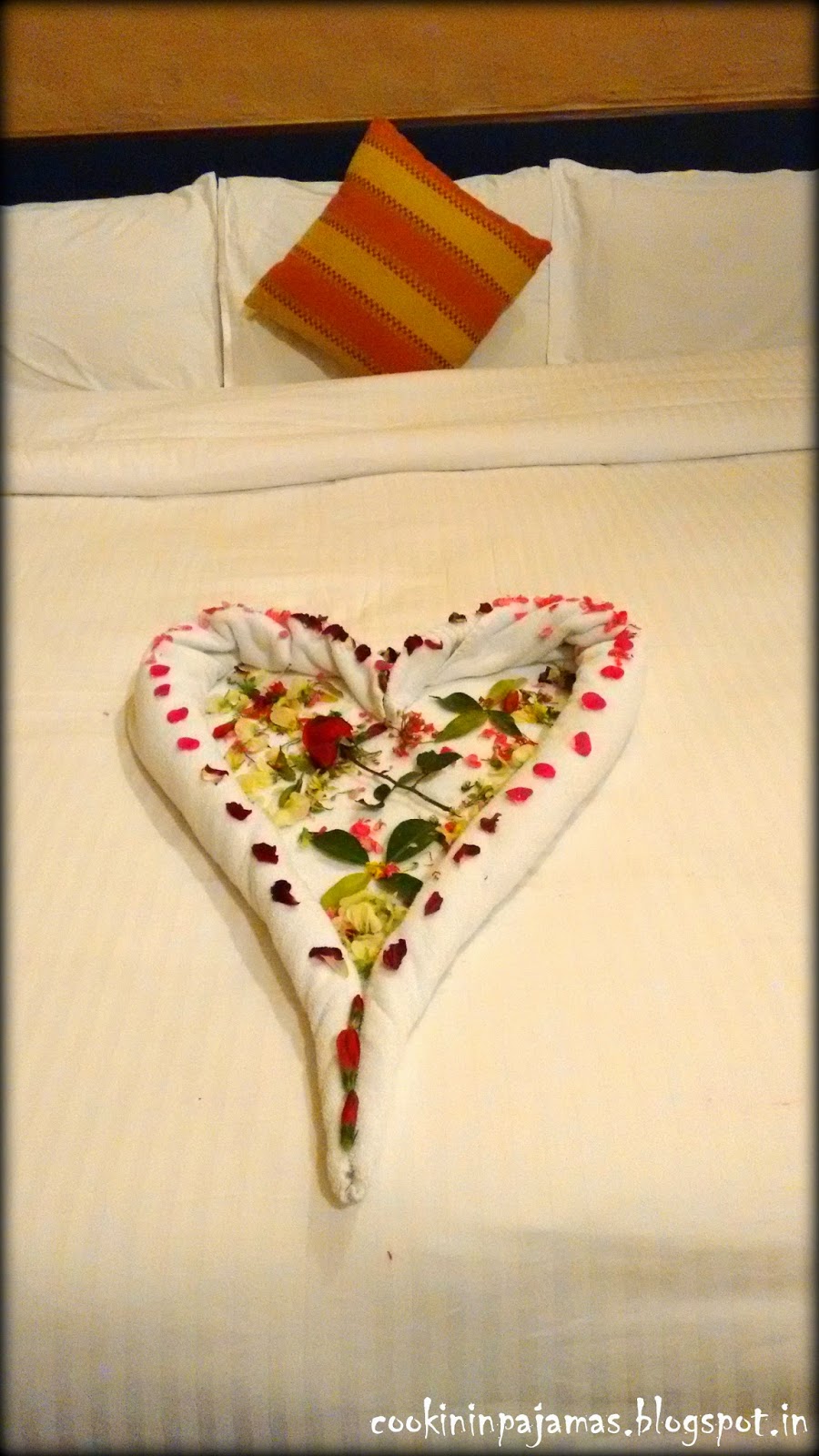 I also want to mention about the Bedmi Poori with aloo sabzi. Terrific combination and so tastefully made, that hubby almost had 5-6 of them! 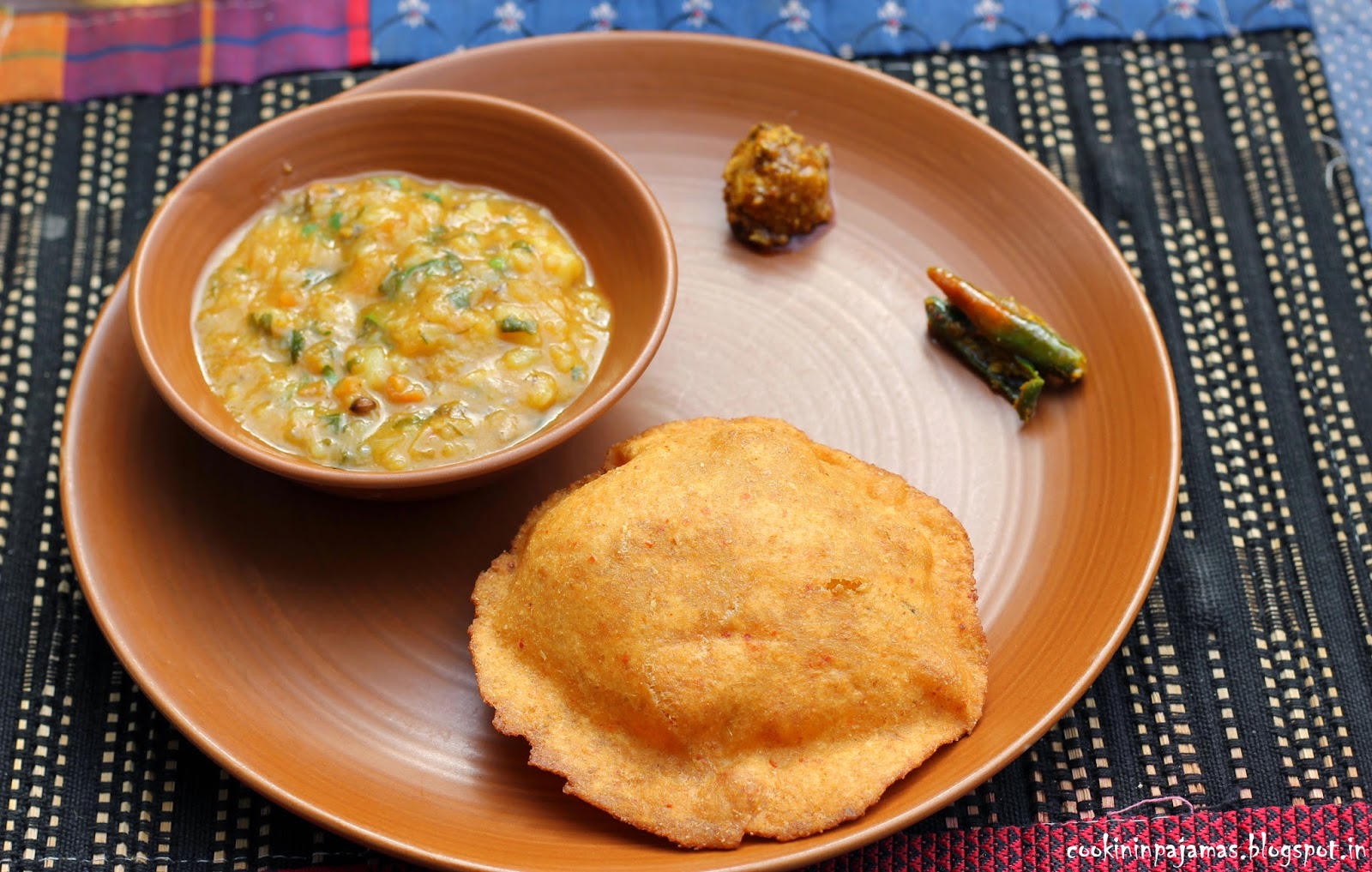 This place truly brings out a different part of you alive and we would surely want to visit them again! A soulful holiday at Soulitude :) 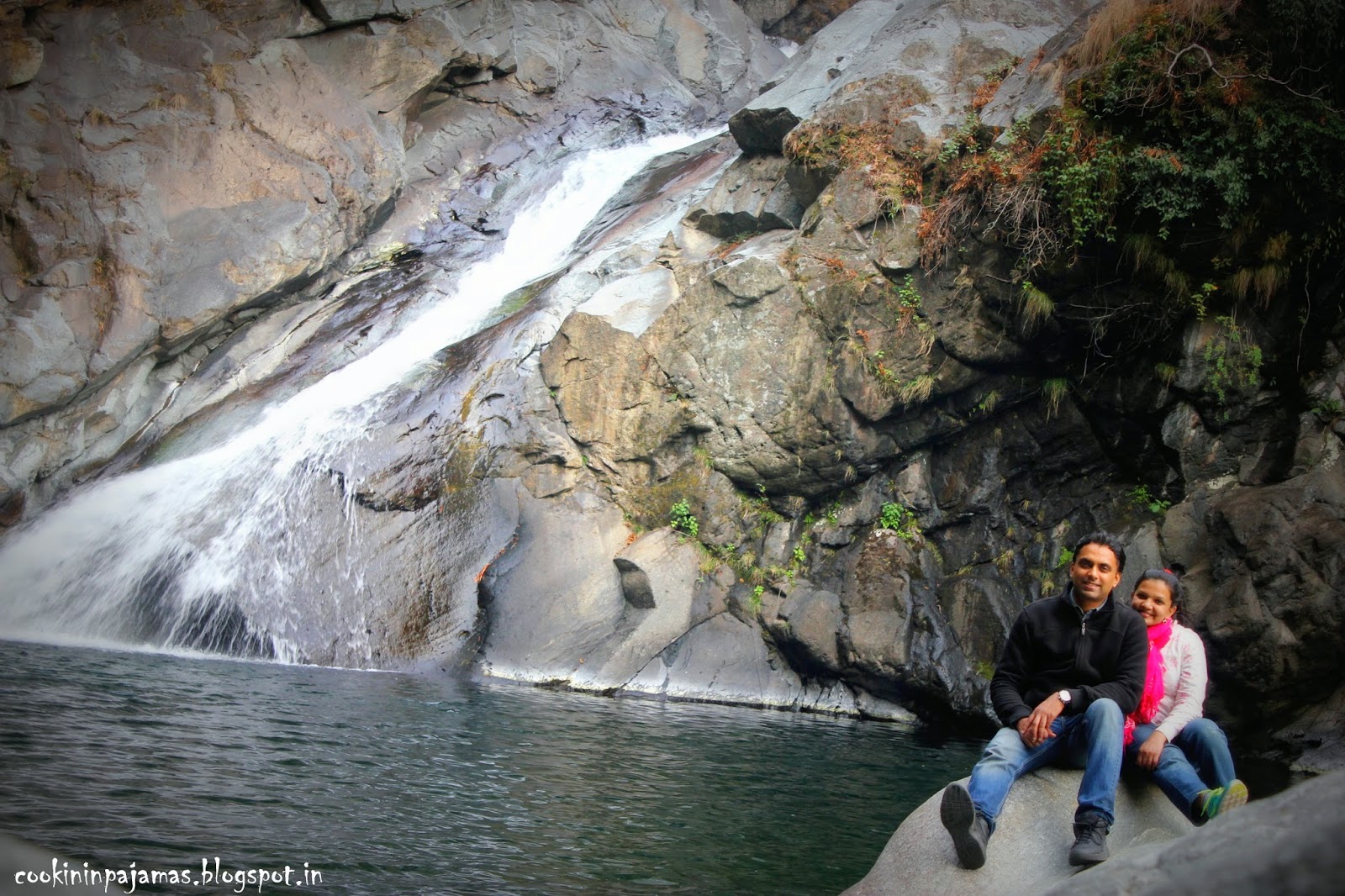