Yesterday was kojagiri pournima. I started getting text messages since morning wishing me a happy pournima and photos of glasses of masala milk and moons! And then a non-Maharashtrian friend asked me, " What does it mean"? And i realised that i didn't knew its meaning!!! In childhood, and until now, all it meant was to drink the yummy masala milk mom has made (strictly allowed to drink after the moon comes out) and also getting excited to sing and dance at the cultural event held in society at nights. Yes, it always used to be a social gathering with all the society people coming together, kids performing some dance or reciting some poems, elders forcing each other to sing songs and ladies chit-chatting over the masala milk they used to boil in the corner. And there was always some snack item too at the side. This all used to be in the night... People waiting for the moon to come out and being awake as late as they can. But i never knew there is a meaning behind all this or so as people think it to be !

Curiosity killed the cat!!! I started doing some R n D, made call to Mom who knew it all as always, searched google and also chatted with my sister in law Namrata Kulkarni. Gathering all the information, here is what i came to know. This is a full moon day which marks the end of the monsoons. On this day, the orbital position of the Moon is such that it is the closest to the Earth as it can be in a year. It is believed that the moon has some healing medicinal rays that it emits on this day ( You have to look at the moon or stand under the moon for minimum 15 minutes) and hence also, the milk is boiled under the moon, so it gets the rays and enters our body when we drink it. Nowadays, people make the milk on gas stove and show it to the moon as "Prashad" ( an offering) or keep it under the moon in balcony for sometime. In old days, people used to have early dinners and this milk was to keep them awake throughout the night. It gave energy( as dryfuits are added ) and it reduced bodily heat ( when the milk is taken cold).

It is also believed that Goddess Laxmi travels from one place to other on this night and while travelling, she asks "Ko Jagarti" which means " Who is awake" and blesses all those who are awake. Hence people do laxmi puja also on this night and sing her songs and aartis. That's how the name Kojagiri came.

I was happy that i learnt something new and thought of trying my hand at something new in the kitchen too ! I had never made masala milk though i knew it was a sister of Basundi ( which i had made once earlier). So here's how i made it and it turned super yummy!! 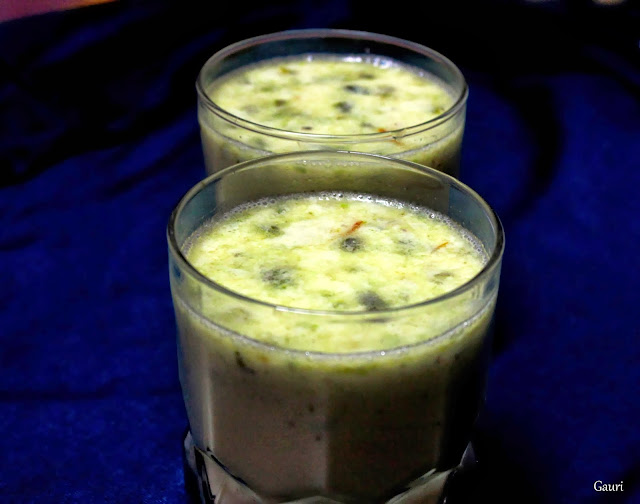 1 litre full cream or toned milk
20 almonds ( soak in water for around half n hour and remove the skin )
10 cashews and 10 pistachios ( Hand grind them. Don't make it into smooth powder. A little coarse or a few small pieces should be visible). You can even grind in a mixer. I prefer grinding in this : 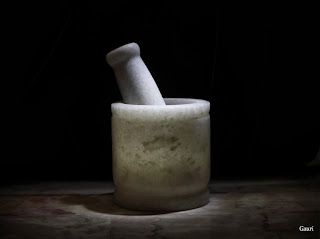 A pinch of nutmeg powder
5 tblsp sugar ( Me and my husband don't like too sweet. You can adjust as per your taste)
Cardamom powder - a pinch ( optional). I didnt add
Saffron - a pinch

Bring the milk to boil on low flame and keep boiling it for 20-25 mins stirring with a spoon in between. Add the nutmeg powder, saffron and sugar and let it boil for another 10-15 mins. The milk should reduce to around 750 ml or even half litre ( if you like it thick but masala milk should always be of drinking consistency and not like Rabdi). Add the dry fuits and boil for another 5 mins.
You can either have it hot or cold.