Makar Sankranti special : Makar Sankranti is a traditional festival celebrated in India which marks the transition of the Sun into the Makar Rashi ( Capricorn sign). For maximum years, it is celebrated on 14th of January... but rarely it also occurs on the 15th of January. It depends on when the sun changes its celestial path. It is also celebrated as the harvest festival.

Childhood memories : My memory of Makar Sankranti is only the " Til-gud" and "Gul-Poli" made by my mother. I love the gul-poli, simply because its crispy, and can be eaten for a week after it's made. Alternatively, you can also make the filling and store it and make it as and when needed. The dough stays in the fridge for almost a week too. I have never tried my hand at Gul-poli, as the process seems too tough and tedious for me. But this time, i carefully observed my mother making it and decided to note down all the small tit-bits she uses to make it just perfect!!! And its not that tough at all, so i am going to make it soon for sure !!! Its such a delight watching Mom cook :) 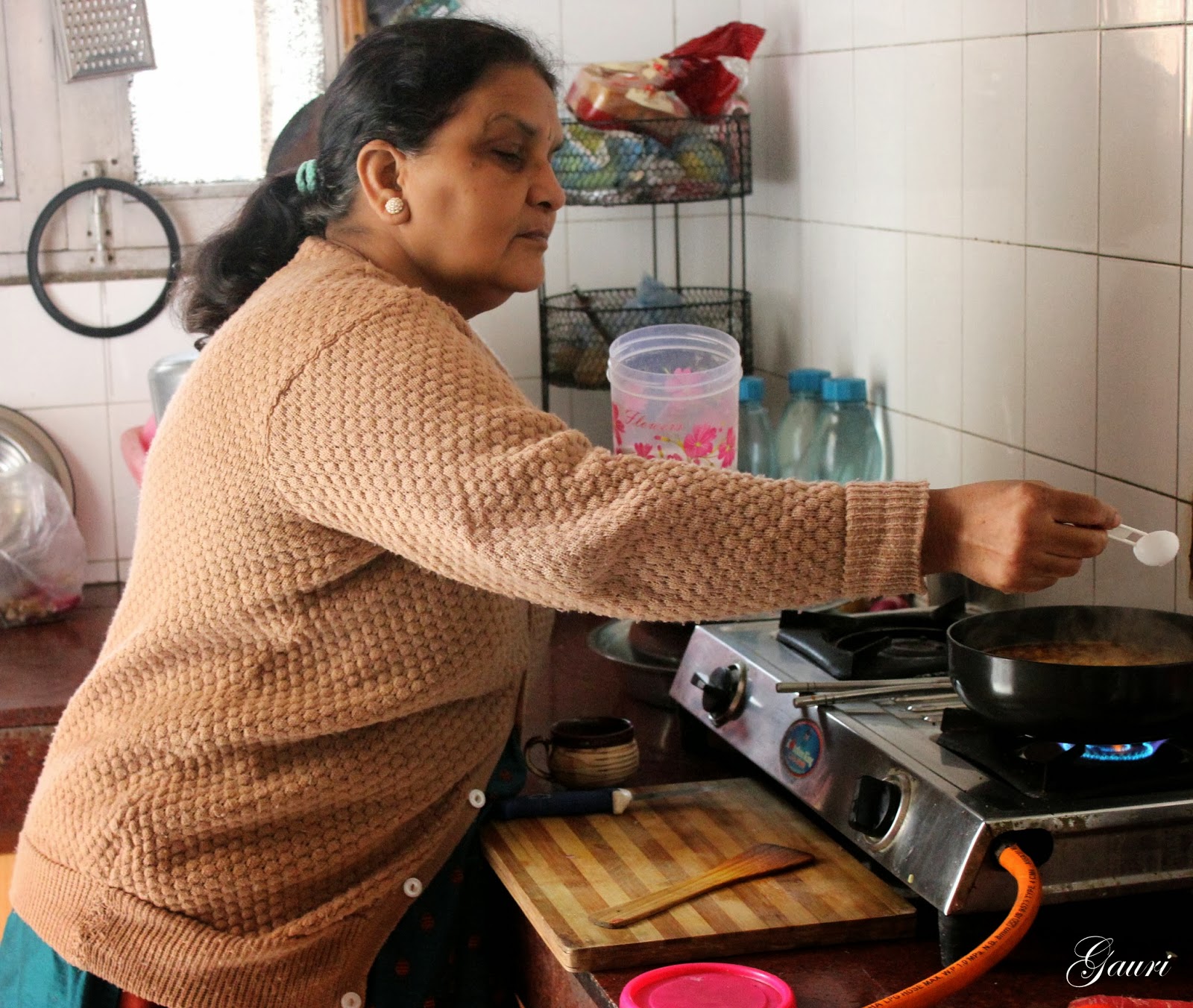 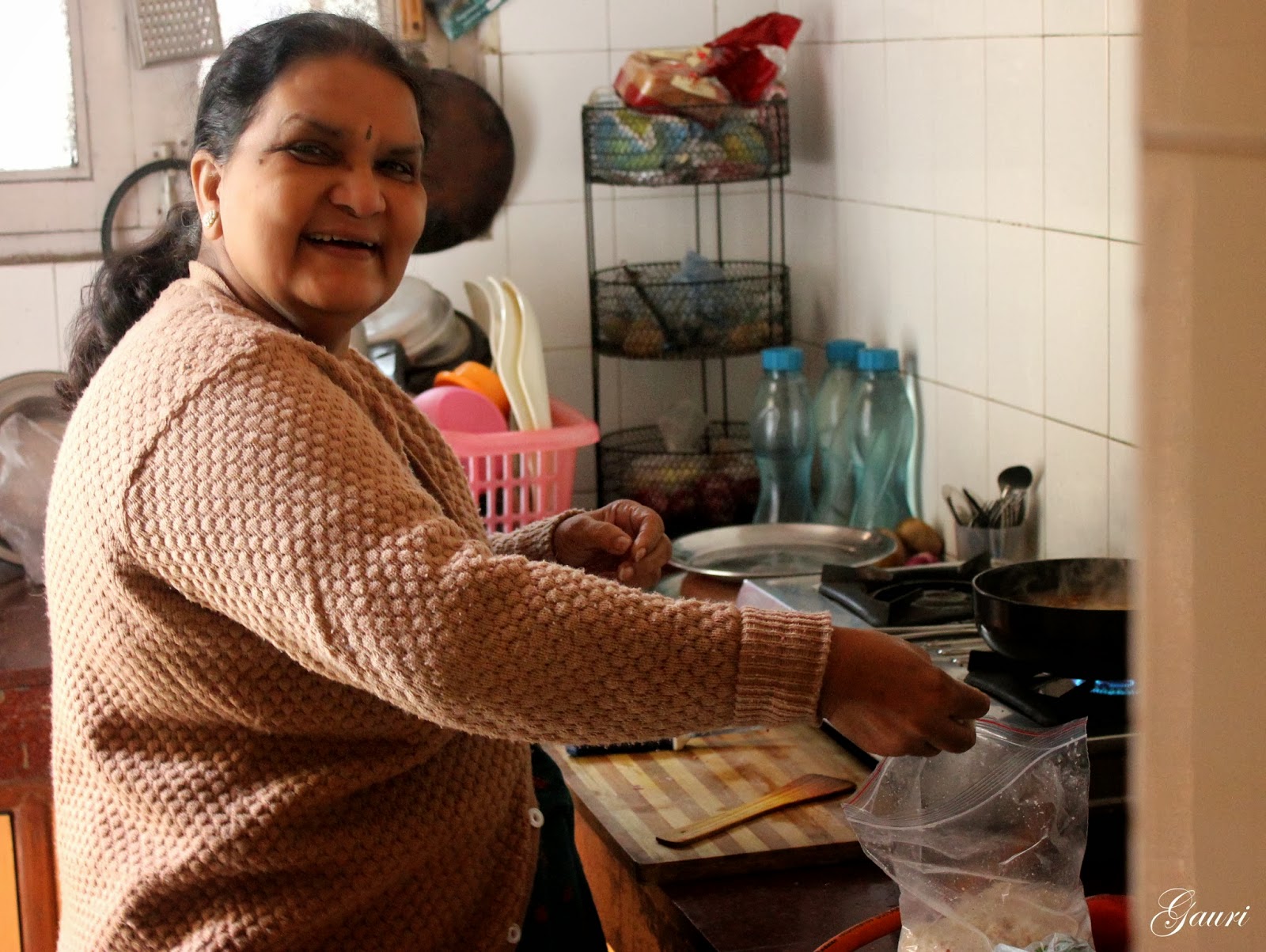 Gul-Poli is usually found in all Maharashtrian homes during Sankranti. It is basically a roti ( bread) made of jaggery. Jaggery provides heat to the body, and hence it is eaten during this season of winter. The til-gud ( sesame -jaggery ) ladoos are also eaten during this time to provide heat and energy to the body during winters. I will post a different recipe for the 2 types of Til-gud ladoos that my mom makes. Meanwhile, here is the Gul-Poli recipe : 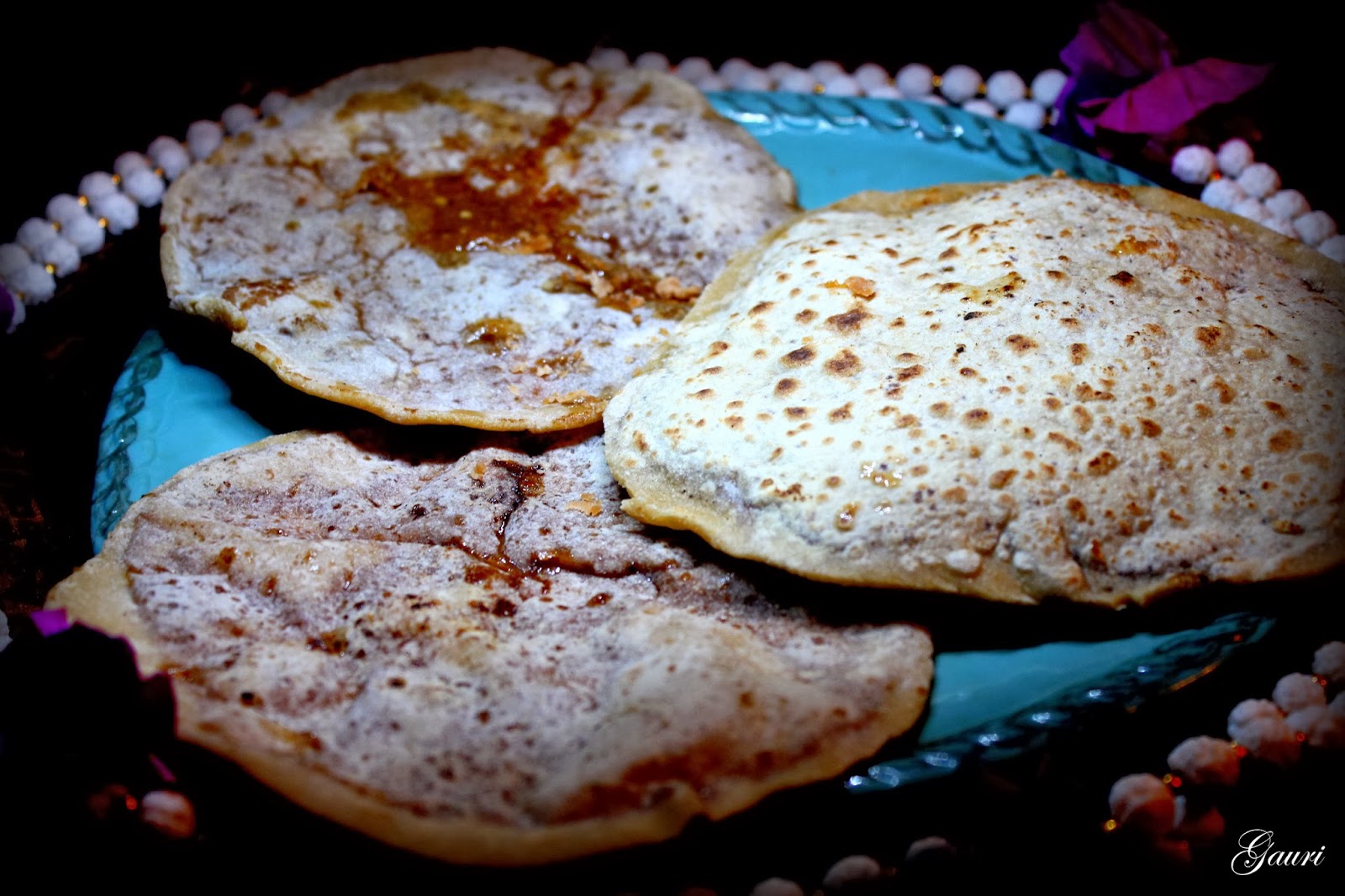 Grate the Gul (jaggery). It should be fine, there should be no chunks in it.

Heat 1 tbsp oil in a pan, and roast the besan ( Gram flour ) till it turns light brown.

Mix the grated jaggery, sesame powder, dry coconut powder and besan well. It forms like a ball. Keep it aside.

Next, mix the Besan, wheat flour and maida together. Heat the 2 tbsp oil and add it to the mix-flour. This is called Mohan. Now knead it into a soft dough. Add water little by little. Keep the dough aside for 30 minutes.

Roll a small ball from the dough to a small chapati, and add the filling. ( You can divide the dough and filling in equal quantities beforehand. )
Now cover it from all sides and close the ball neatly.
Roll this ball again into a thin chapati ( Flat bread) ...You can dust it with flour if it sticks.
The idea is to roll it carefully , so the filling doesn't come out.

Now heat a pan ( Tava ). Place the poli on the tava. Do not add any oil or ghee on top. Roast till done or till light brown. 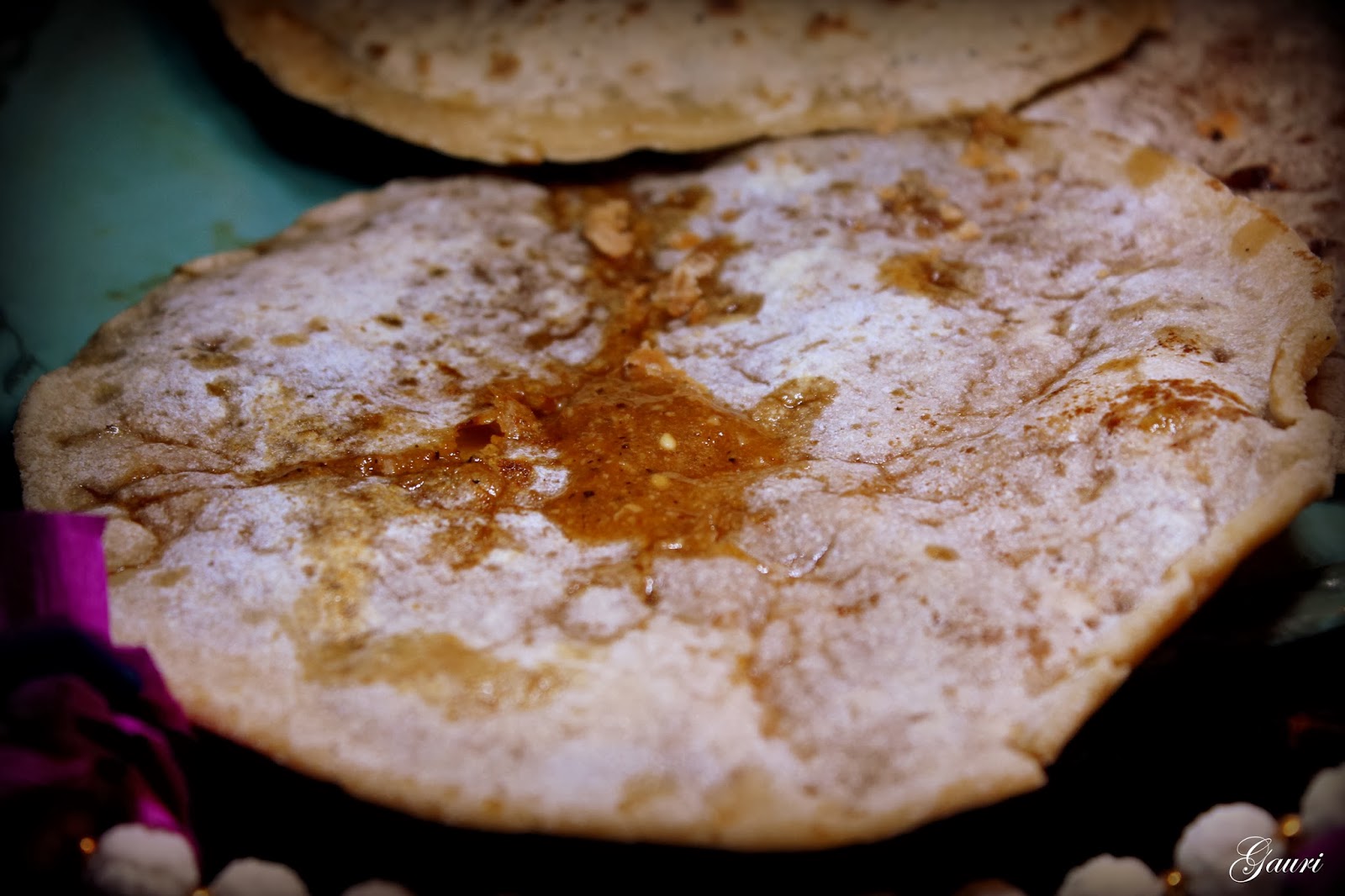 Mom's Tips :
1. Always roast the Polis on tava on low flame
2. If the filling comes out of the Poli, then you can add a pinch of Lime ( Chuna which is used in Paan )to the filling.
3. Never stack the Polis on top of each other when hot. Spread them on a newspaper till they get cold and then stack them at room temperature. 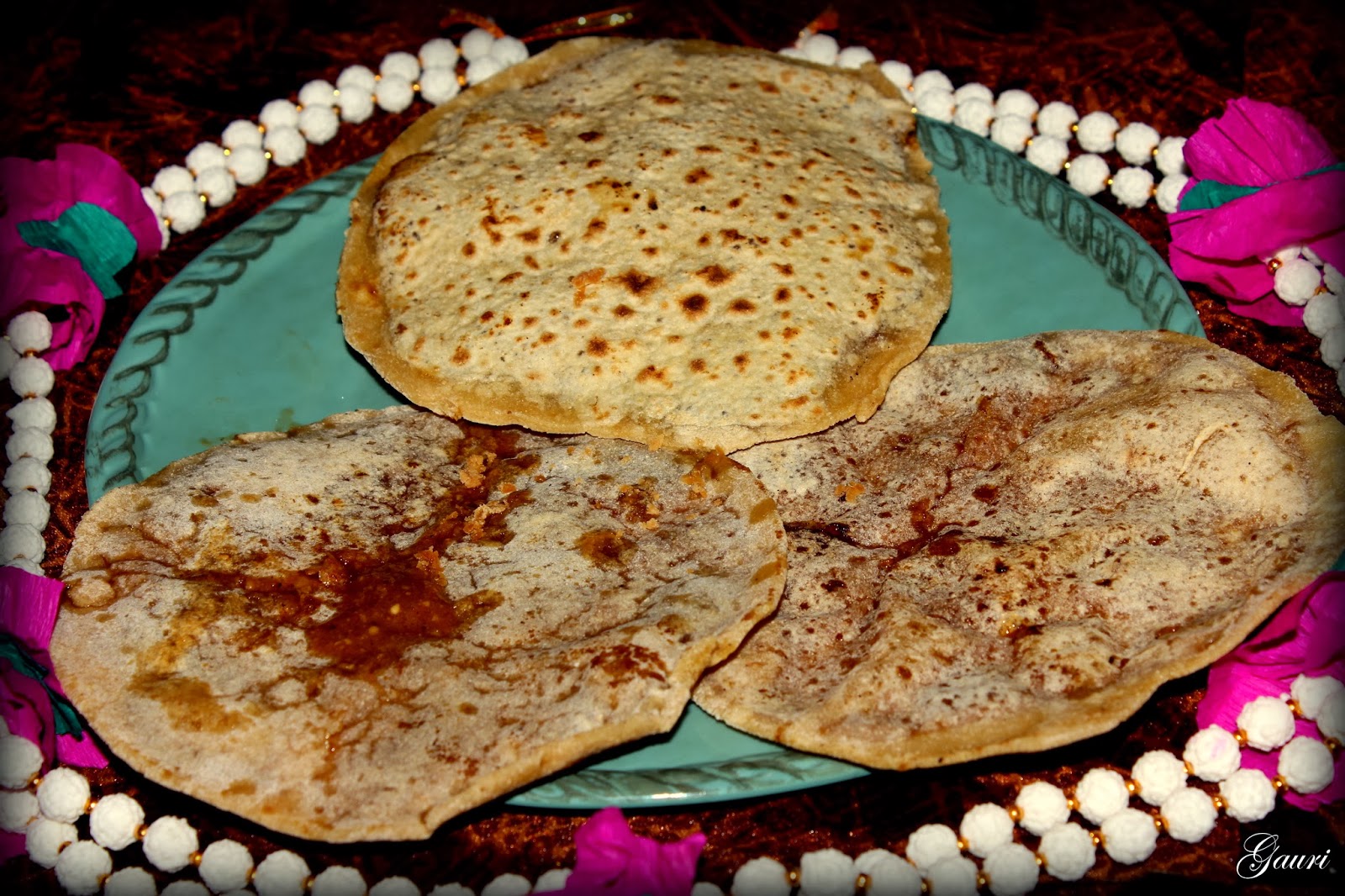