There are so many types of breads in this world, the list really amazes me! Each country, region or town have their own distinct version of bread. The basic ingredients remain the same, but just "a hint of this, and an addition of that" changes the whole flavour, texture and taste of the bread. One of my blogger friend from Norwegia (Sharon) has recently sent me their local bread recipe, which i am going to make soon and post it on the blog.

I have grown up with eating Pav from mumbai in my Vada Pav's and Pav bhaji's. So when i came to Delhi, the taste of the Pav was completely different for me. Pav is Indian bread, but the concept of it was introduced to us by the Portuguese in 15th century. The early Portuguese presence in India was "Missionary-heavy" and they made bakeries and baking a priority. These missionaries trained and taught the converts in Goa, the art of baking bread. Since yeast was not readily available, they used to bake with fresh coconut Toddy.

Well, making Pav is super fun. I purposely made small buns and gave them a round shape. But you can shape them as you want. Making them small surely helped since i was making it for the first time and they turned out super soft.

I served some as a tiffin breakfast to hubby by spreading jam and butter in between. And some, i made into mini-burgers :)) 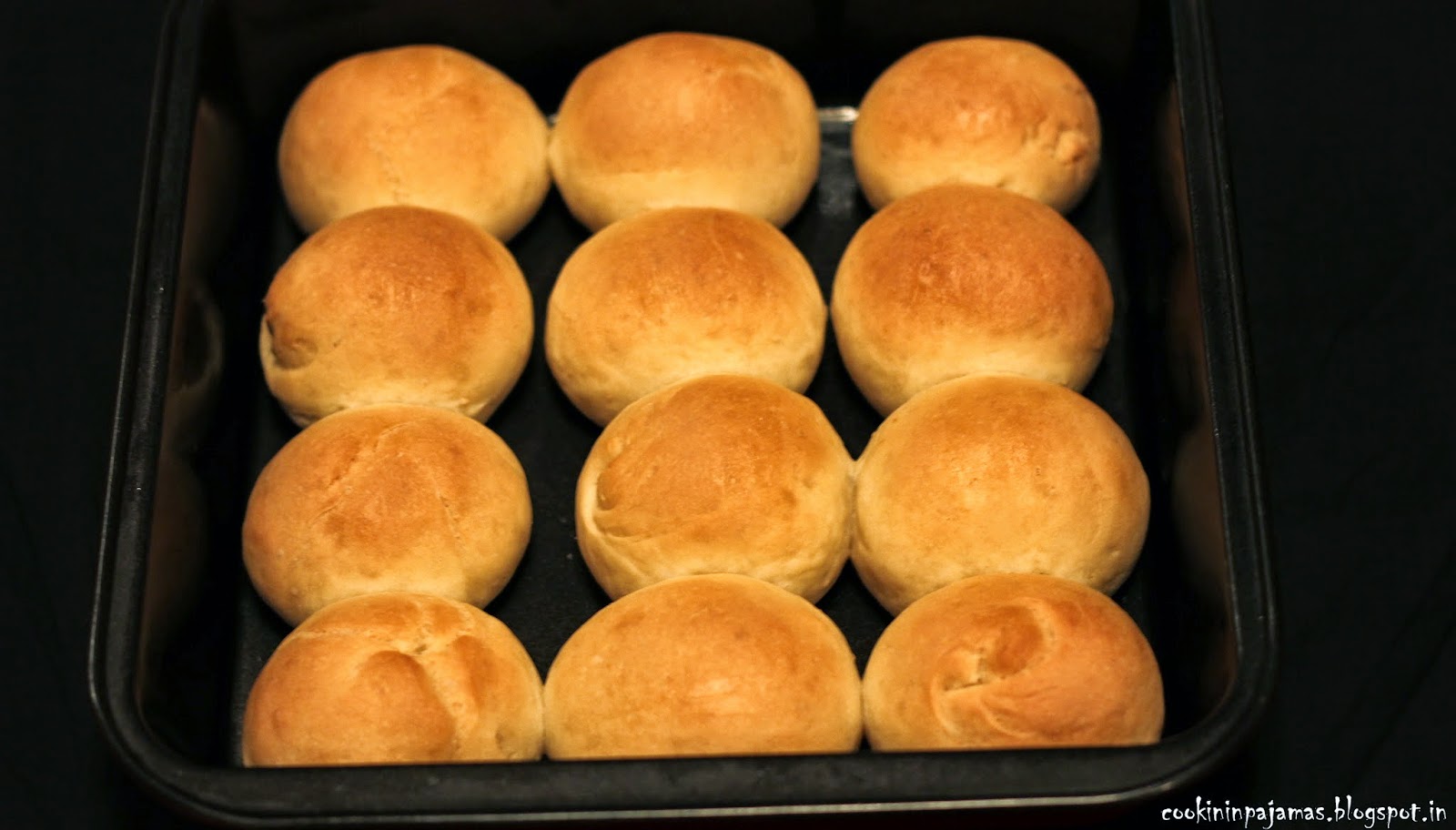 Take a bowl and grease it with oil. This bowl is to be used for raising the dough, so take a little bigger one.

Yeast: There are two types of yeast. Instant and Active dry. If you have instant yeast, there is no need to activate it. But if you have dry yeast, you have to activate it. This process is called proofing. It is always beneficial if you proof the yeast.

Take 1/4 cup water and warm it. It should be lukewarm and not hot. If it is too hot, the yeast will die and if it is too cold, the yeast will not raise. Add about 1 tsp sugar to it and mix well. Now, add the yeast. Mix and cover the bowl and let it sit for about 8-10 minutes. The yeast will rise a bit.

In another mixing bowl, add flour, salt, sugar and butter.

Now make a small well in between and add the yeast. Mix well and now add milk little by little. The amount of liquid added depends on the strength of the flour. So don't add everything at once.

Add slowly and start kneading the dough. Knead for about 10 minutes.

Place this in the greased bowl, cover and let it sit for about 1 n half hours to raise. 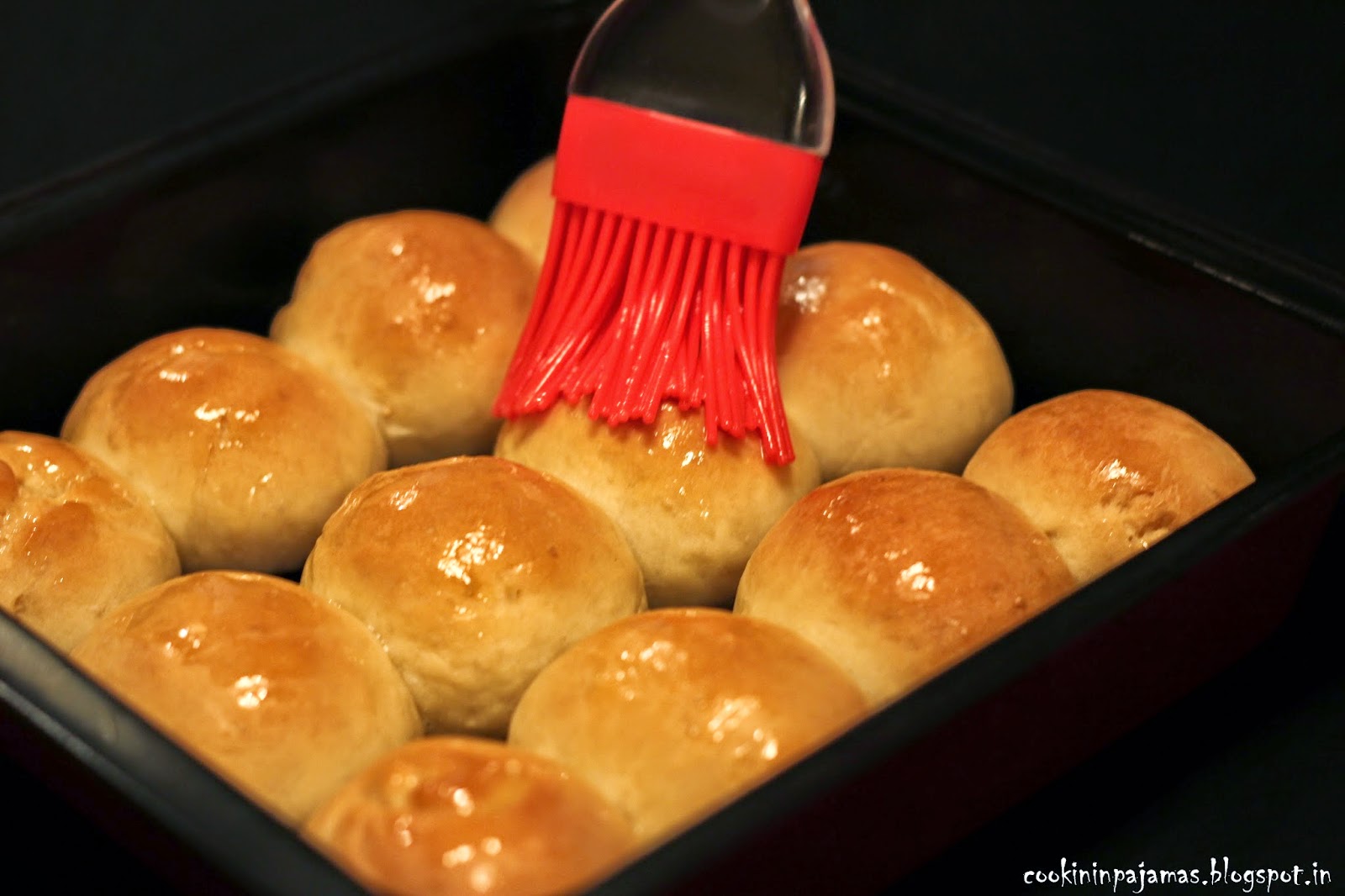 Now, take out the raised dough, spread some flour on the wooden board and knead it for another 5-7 minutes till all air comes out.

If the dough is too sticky, add some flour and knead again.

Make equal sized balls and flatten them a little or shape according to your wish.

Grease a baking tray with some butter or oil and place the balls in the tray leaving little space in between for them to rise up.

Cover this and let it sit for another 1 n half hours to rise.

Please keep the bowls to raise at room temperature only.

After about 1 n half hours, preheat the oven to 180 degrees Celsius.

Brush the raised dough balls with olive oil/normal oil or milk and bake them for about 30 minutes till the top becomes golden brown.

Remove from the oven and brush some melted butter on them. 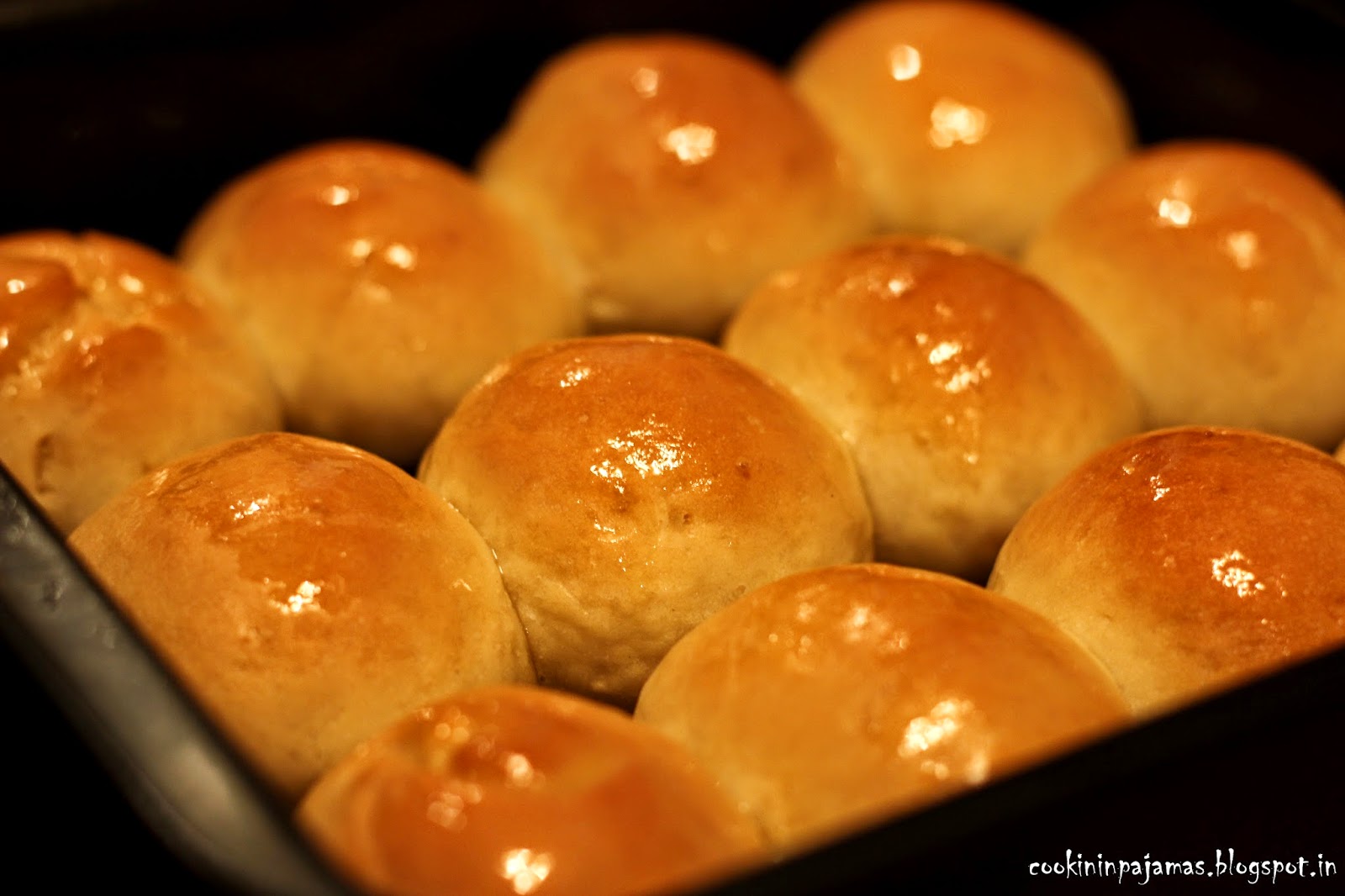